Get Over Perfect and Push Deploy Already

The Nobel-Prize winning physicist Richard Feynman spent his life unravelling questions of science and mysteries of the universe — including the behavior of ants.

He would perform afternoon-long experiments, waiting for ants to find sugar he’d laid out, to understand how they knew where to go.

One question that I wondered about was why the ant trails look so straight and nice. The ants look as if they know what they’re doing, as if they have a good sense of geometry. Yet the experiments that I did to try to demonstrate their sense of geometry didn’t work.
— Surely You Must Be Joking, Mr. Feynman!

When he noticed ants emerge around his bathtub, he saw an opportunity to answer that question. He placed some sugar at the opposite end of the tub and sat for hours until one ant finally found the sweet prize. Feynman traced the ant’s route back to a hole with a colored pencil. The path was not straightforward but wandering and wiggly.

He repeated this process with the next ant to found the sugar, tracing that path with another color, and then again, following about 8 or 10 ants in total. Feynman discovered that the paths became successively straighter and more direct, until the trails looked like a neat line. He compared it to sketching: “You draw a lousy line at first; then you go over it a few times and it makes a nice line after a while.”

What do ant trails have to do with success? Most people don’t like to produce wiggly lines — and that discomfort may be what’s guiding your company’s path.

What Ants Have to Do with Software Development 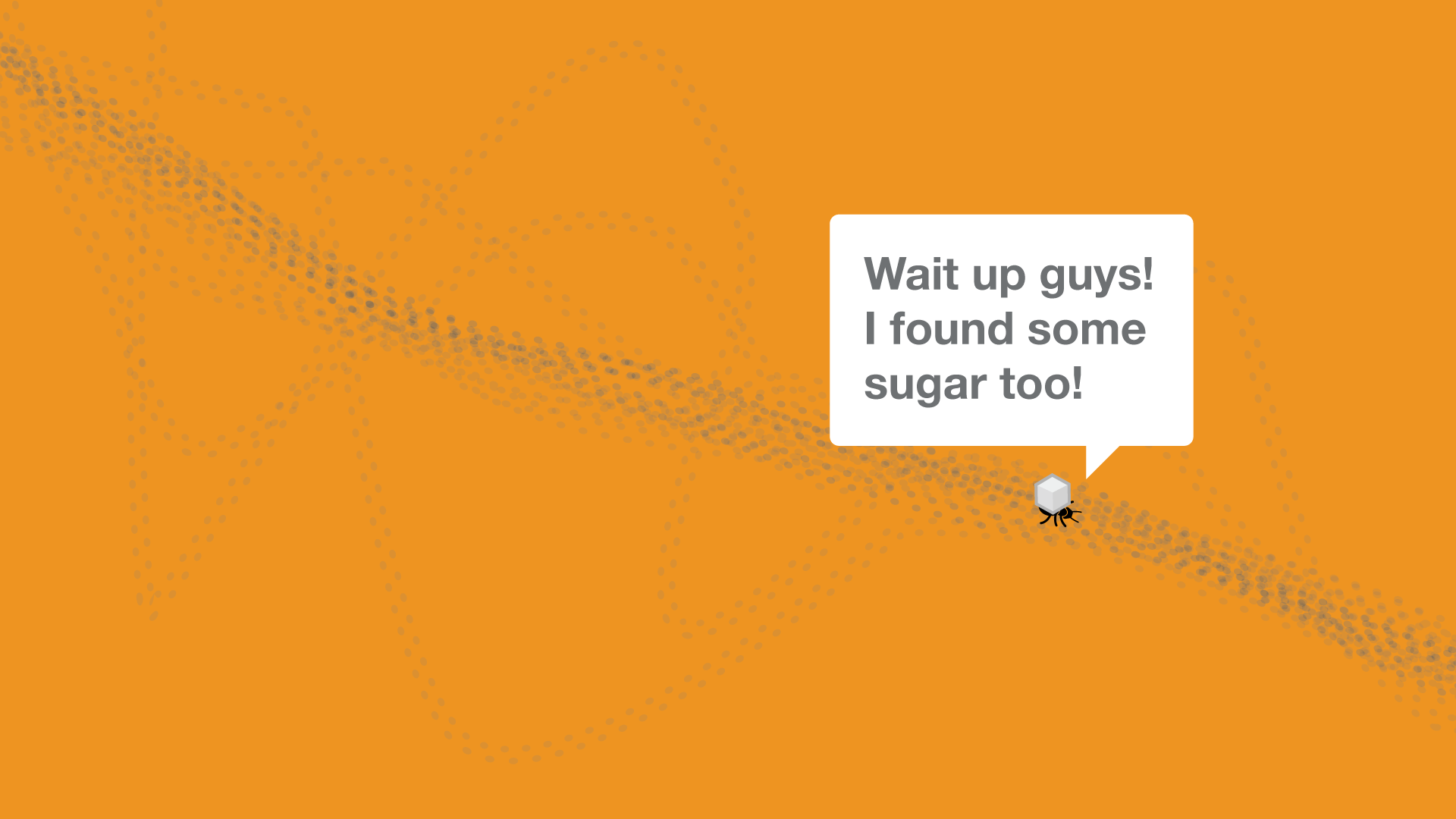 Individually, ants aren’t smart, with no innate sense of direction. The first ant essentially stumbles upon sugar by accident, but then, as scientists later discovered, leaves a pheromone trail to signal to his fellow ants that he found some food. It takes more journeys by more ants for the best route to emerge.

Jad Abumrad sums up this ant intelligence beautifully in a Radiolab episode on emergence: “Error is architecture.”

The ability to view errors as building blocks underlies the difference between what Patrick McKenzie calls launch cultures and shipping cultures in software development: “The work / conditions are not optimal yet. We should delay.” vs. “I pushed deploy already.”

Launch cultures vs. shipping cultures: “The work / conditions are not optimal yet. We should delay.” vs. “I pushed deploy already.”

Launch cultures are an old-school approach, waiting to release software when considered done and ready. Work goes on for months, even years, before the big day.

Shipping cultures, on the other hand, value getting work in front of people and the crucial learning that results from making mistakes in public. They are agile and able to iterate based on real-world feedback. Getting over the discomfort of pushing deploy before you feel entirely ready comes with a great reward: faster, more impactful progress towards the nice straight line.

The Marketing Cost of Perfection

Shipping culture is now common for engineering teams, especially in the startup world. It’s almost cliché for developers to subscribe to tidy maxims to ship early and often and Facebook’s now-famous motto to “move fast and break things.”

When it comes to marketing though, people still hold stubbornly on to the slow-moving launch mindset and fail to take the opportunity to iterate. You’re waiting until you set up that optimal content management system. The blog design has to be just right. What if it’s not the best time to email customers? What if you turn people off? No wonder email campaigns, blogs, podcasts, and other marketing efforts always seem to take a backseat compared to product, or take forever to get off the ground and then fizzle out.

Behind the supposedly safe approach of the launch mindset is a risky paralyzing fear of failure.

When we opened up our product launch list, six months passed before we sent our first email. Colin even admits that this was the dumbest thing the company has done so far. The email list went cold, and we had to start from scratch to remind people who we were and why they’d signed up in the first place.

What was the reason for waiting so long? Fear of screwing up that optimal case: “Saying anything is bad. We’ve got one shot at emailing people to check out our product. Let’s make it perfect.”

Perfect is impossible. Perfect distracts from the work at hand. Perfect is counterproductive. In sitting on those email addresses for half a year, we lost both goodwill and opportunity.

We now try to operate with a shipping mindset. We deployed a new features page before Jon Quach, our designer, felt he was done. He could keep working on it afterwards. There’s a cost to waiting for optimal work and conditions that never arrive.

There is No One Email Marketing Trick

Putting shipping culture into practice requires a sense of humility, readiness to learn from imperfection, and willingness to take small risks. Forget the grandiose visions of success that are so easy to indulge in when you’re waiting for a big launch instead.

As writer Cheryl Strayed put it so well: “We get the work done on the ground level.”

Research is beneficial, and especially as a novice, you want to learn the best way to do things. But that’s often the trap — you start thinking about optimization without having anything to optimize, to skip floors and avoid the work on the ground level.

One of the most fascinating things about email is that because the space is so crowded, the landscape so quickly evolving, the results so dependent on context, that “best” almost loses meaning. One striking advantage is to simply to stand apart from the crowd, which is why finding your own path can be much more productive.

Take the finding in Science of Email 2014 report by Litmus and Hubspot on one of the most common questions about email: the best time and day to hit send. 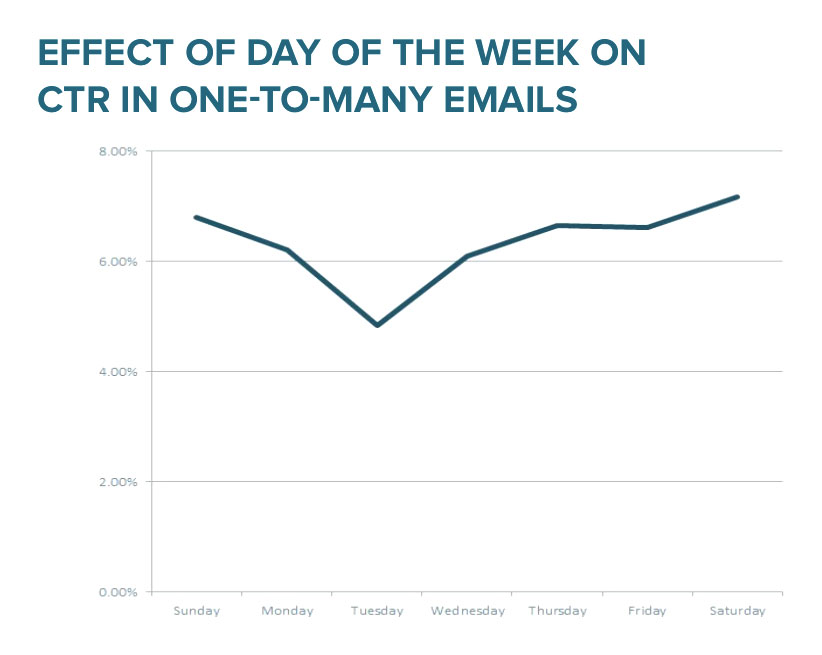 Most marketing emails arrive in inboxes during work hours in the middle of the workweek because that’s when people are checking email. Weekend emails see higher click-through rates. Study author Dan Zarrella calls this “contra-competitive timing” — simply by doing the opposite of what’s popular, you can gain an advantage.

But it’s unclear whether it’s better to do what others have found successful or to go against the grain until you actually try something to see what happens. There’s the same caveat in practically any advice on “best” ways to email — that the real best way is to find out yourself, based on your knowledge about your audience and your goals, and improve from there.

Feynman was known for his boundless curiosity, which meant that he dove right into finding things out for himself. Of course he also put it best himself: “We are trying to prove ourselves wrong as quickly as possible, because only in that way can we find progress.”

It’s one thing to learn from books and blogs and the experiences of others, but in learning by doing — pushing deploy, publish, and send — you enter the complexities and curiosities of the real world with its real people. Your progress depends on what you can learn from doing work on the ground level — shipping, testing, and analyzing to understand what’s going on, be able to improve upon it, and find the best way to go toward your goals.

What’s one thing you learned from shipping before you were ready? Share your ant journey with us in the comments!