The Net Promoter Score (NPS) is one simple metric that helps steer businesses forward. For Slack CMO Bill Macaitis, NPS is a vital indicator of health and long-term growth for a company — a “north star”. He explains:

This high-bar question provides meaningful feedback, not just to understand how you’re really doing but how you can improve. As SatisMeter cofounder, Ondrej Sedlacek, told us, the point of NPS isn’t the score but what good you do with it:

Your whole company should be focused on your customers, and NPS is a great way to make it happen. Don’t just run a business or sell products. Aim to create an experience your customers will never forget. 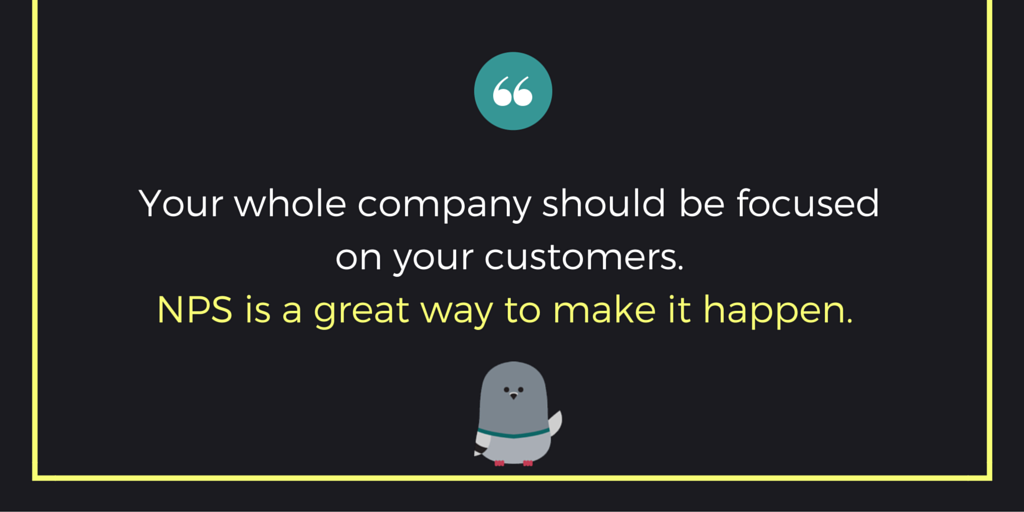 We’ve already covered some of the basics of net promoter score and ideas for following up with your respondents. Here, we’ll go over 5 practical considerations for running your NPS surveys to best find and follow your north star metric.

Determining the timing and frequency of your NPS survey depends on your strategic goals and your customers. For instance, if you want to measure and improve user experience during a product trial period — as well as leverage that insight — you’d want to tie the survey timing to a user’s trial schedule.

Don’t send a survey too early. People first need a chance to experience a product or brand to form a substantive opinion. Whether it’s after a specific user action or important temporal marker, schedule your survey at the right moment for the individual. For Andy Zenkevich, co-founder of Get A Copywriter, a content marketing service, “Timing is key. We show the survey when the client approves their first order,” he says.

Measure NPS regularly, not just once. Opinions — and products, for that matter — evolve. Chad Keck, CEO of Promoter.io, explains why surveys should be routine:

Customer sentiment changes rapidly, typically in correlation to how often the product itself matures. This is why NPS is a routine measurement and is often measured quarterly.

If you don’t measure NPS regularly, you will miss opportunities to proactively engage customers based on those changes in sentiment.

A regular survey cadence creates a positive feedback loop for growth. You stay aligned with your customers and continually improve on their experience.

Don’t batch and blast your NPS. While sending bulk NPS surveys is probably better than not asking for feedback at all — it’s best to avoid big batches. Batch-and-blast surveys will reach people at different stages of their lifecycle. Instead, approach NPS surveys like a behavioral drip email series that triggers based on user lifecycle stage, account state, or plan.

Each user can then respond to the NPS survey at comparable points in their experience rather than an external, random timetable. This method is more consistent and gives deeper insights beyond whether someone is a promoter, passive, or detractor on a certain date. For instance, you can see better data on how the opinions of specific segments like new users versus longtime promoters change after an product update.

There are two popular methods for running NPS surveys online: in-app and email.

In-product surveys tend to get higher engagement and more immediate feedback, because you’re reaching users in context. That’s exactly what Andy found with Get A Copywriter, where they built an NPS survey tool in-house: “We learned that our survey completion rate is highest when we show it at the right moment, while the user is still engaged.”

Email surveys might get a lower response rate, but the experience is also less intrusive. You’re not interrupting someone’s workflow to ask them a question and you can reach more people — including less active users who aren’t logging in to see the survey — for a more accurate score. Plus, you’ll collect fewer opinions clouded by any one particular session.

Ondrej at SatisMeter advises doing both:

The best practice we recommend is the combination. First, run the in-app survey, and if the user doesn’t respond after couple of weeks, send the email survey.

Collecting scores is the first step. The next is acting on those scores — following up with respondents and just as important, sharing the feedback internally. “Make sure customer feedback and ideas get to all the right employees to make your service better,” recommends Ondrej. You could have regular team reviews of NPS results — or pipe responses into chat apps like Slack for general awareness and more specific tools like a CRM for more targeted purposes.

That’s how NPS data becomes so powerful in impacting churn, retention, and growth. The sales or customer success team, for example, would want to know who looks like they’re about to churn. The product team can learn about actual user experience. Marketing could study how promoters and detractors talk about their experiences or leverage responses for growth initiatives.

In fact, studying NPS data is how Slack came up with their marketing message, Macaitis recalled in an interview with The SaaS Revolution Show:

That’s when we started to get around this theme of all your communications in one place. We consistently saw that’s why people were recommending us… A lot of that came off of the NPS survey and understanding why people like Slack — and conversely what were the areas we can improve and routing that to the product team in making sure it’s a good holistic feedback loop.

Now let’s look at how one company runs its NPS process. Amy Trus, Senior Lifecycle Marketing Manager at VideoBlocks, a stock video footage site, shared how they use Customer.io to send surveys to users and then trigger targeted follow-up emails based on the scores.

They send their survey via email: 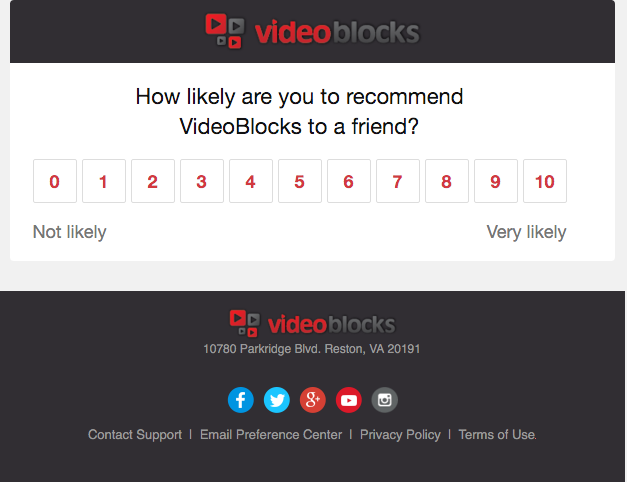 Clicking on a number in the email takes you to a form on their site to explain your rating:

Customer.io receives the event data that a user has answered the survey and records that score as an event attribute.

Using the rating as a trigger condition, VideoBlocks then automatically sends a follow-up message: 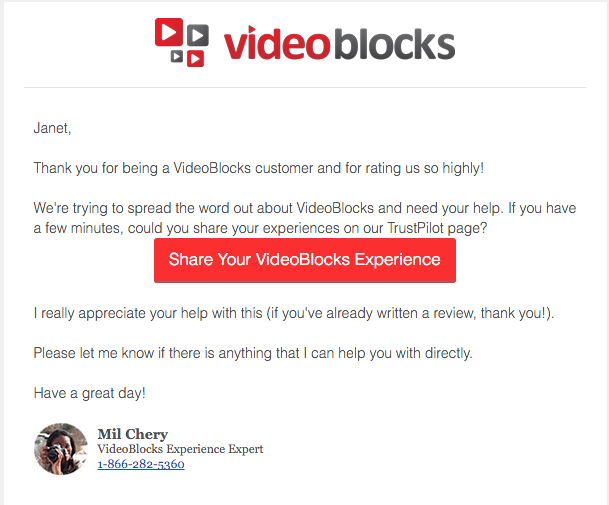 “The follow-up is important because people want to be involved,” Amy explains. “They want to know that we’re something with the feedback they give us. Also we can use NPS as a chance to win back people.”

The VideoBlocks team schedules and segments the surveys according to lifecycle intervals and subscription plan. For example, trial members see their first NPS survey 6 days after signup (a day before their trial ends) whereas annual members see their first survey at 30 days. By dripping the requests according to user context, instead of doing intermittent batch-and-blast campaigns, “we get people in the same step or time period of their experience,” Amy explains.

The team examines the scores and feedback once a month, tracking the results over time and looking for themes in the open comments. Recurring NPS surveys also help identify and check in on specific features and issues. So if complaints about searching on the site resulted in revamping the search function, the team can tell if they actually made customers happiers from the surveys before and after the changes.

“NPS is a great indicator of happiness,” Amy sums up.

One important takeaway, according to Amy, is that customers who complained the most also tended to be the most engaged. Complaints, while negative, mean that people care — and that’s something you can work with. In fact, it’s the middle-of-the-road passives you might be most nervous about — which reinforces the lesson to be especially thoughtful about how you engage your passive respondents.

In trying to improve a product or business, comparing your NPS results to average benchmarks can be misleading, from apples-to-oranges comparisons, or unhelpful, from lack of context. Instead, benchmark against your own past performance to see whether you’re making progress.

However, you may find these general benchmarks useful as a starting point to shape your expectations and set goals.

An average response rate for NPS surveys is between 30-40%.

That’s much higher engagement compared to other types of surveys. According to Chad from Promoter.io, typical surveys see a response rate of less than 5% while he sees an average of 35-40%. Similarly, at SatisMeter, the average response rate across all clients in February was around 36%.

“It varies depending on industry,” Ondrej clarifies, “some of our customers have over 60% response rates.”

Detractors also provided longer and more detailed explanations of their ratings. As Videoblocks found, people who have complaints care and providing the opportunity to voice those thoughts in turn enables you to make improvements.

Watch Out for Cultural Differences

If you have users in more than one region, take care to consider cultural differences in how people rate on a numerical scale, as that may change how you define your NPS segments.

When he was heading up growth at Mention, which makes a media monitoring tool used across the U.S. and Europe, Guillaume Cabane figured out that the NPS ratings scale across the two regions wasn’t consistent. A 7 in the U.S. did not mean the same thing in France. He explains that he would define European customers as quite happy promoters, even if they gave ratings of 6 or 7.

Why is this important? Your core goal is really about making sure you understand what your customers are trying to communicate to you. And second, as Mention found, incorrectly interpreting promoters as only 9’s and 10’s across the board meant that they were missing potential upgrade opportunities.

When implemented well, NPS surveys provide the information you need to power improvement throughout a company, create amazing customer experiences, and grow your business. How does your team run NPS surveys?