How to Win Back Your Lost Trial Leads

Are you ever convinced by those winback emails that lament “We miss you!”?

That particular sentence makes me cringe. There’s the misplaced focus on the business, dismissing whether I’m missing anything or not. Plus, somehow the wording always prompts the thought that it’s not really me that they miss but my money. 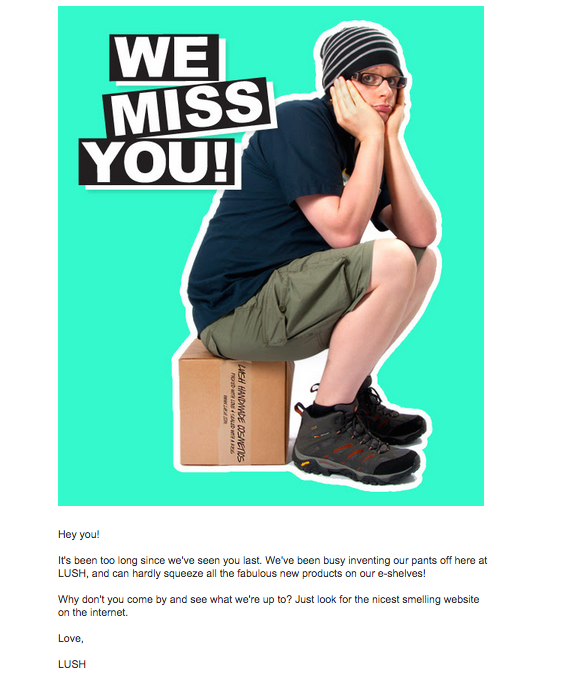 Winback emails aim to reactivate former users and customers, but they often miss the mark because they fail to connect with and feel relevant to its recipients. It’s an awkward stage — you’re reaching out to people who have recently shown that they might not like you or want to stick around. But that’s no reason to discard those relationships or risk throwing away value and trust that you worked hard to build along the way.

So how do you get back in touch without coming off as selfish or desperate? You have to think about who you’re trying to motivate and what’s in it for them. And when it comes to reengaging trial users for SaaS and subscription businesses, that isn’t always easy.

You’re probably familiar with retailers’ winback emails that try to get you to return to make another purchase. Generally, these messages include some combination of these persuasion tactics:

Take this winback email from Crate & Barrel, which combines these elements: 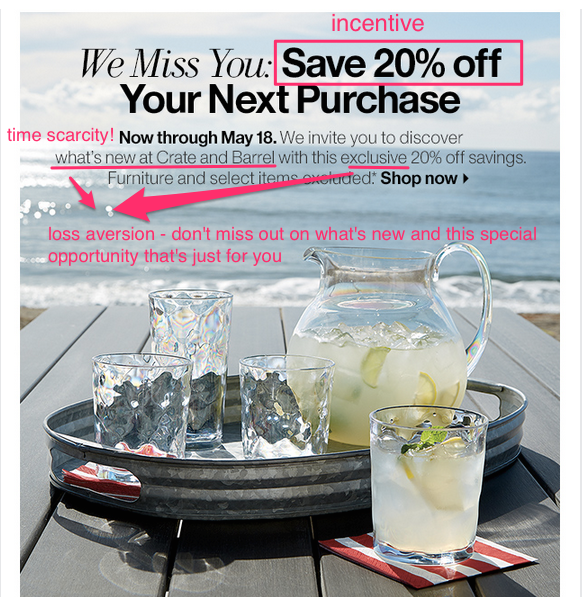 All winback emails should contain a strong incentive for the reader. But the most common method of offering a discount or special deal isn’t always a great fit for SaaS or subscription-based businesses, since folks aren’t making one-time purchases here and there. Attempting to summon loss aversion by talking up features and benefits can also be misguided, given the timing. The prospect of loss isn’t going to work as a motivator when people have recently decided that they’re okay with the actual loss.

What’s left? You can offer one-time deals down the road or wait for a big product or company announcement to try to reengage people. But what if you’re months away from the next big feature set or don’t have anything new to show off?

That’s what Luke Ryan, Director of Growth at the SaaS company 15Five, wondered when he wanted to reengage people who’d gone through a free trial without converting. Instead of offering a discount or waiting for notable feature improvements, Luke decided that there was still something of value the company could offer — educational content in line with 15Five’s product and mission.

The softer sell was a deliberate strategy. Luke explains: “A lot of 15Five trial [users] were not ready to integrate the product into their teams, but that’s not to say they aren’t interested in becoming better managers or leaders. Providing this group of people with helpful content around that theme is a useful way to stay in touch until they are ready to take on 15Five.” 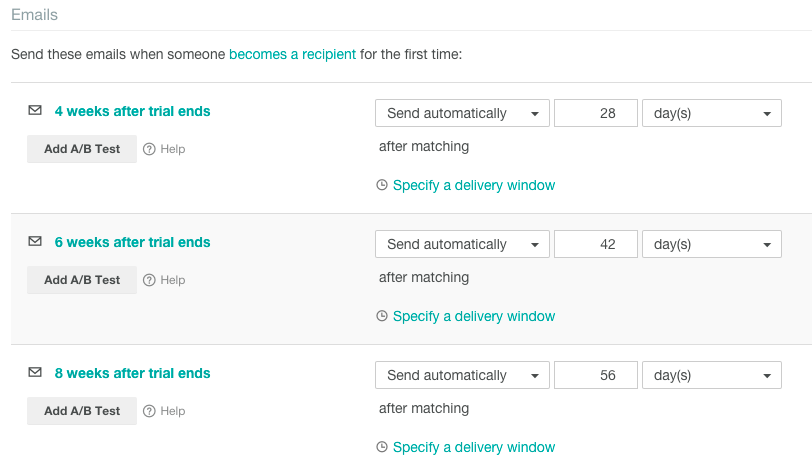 Luke created a reengagement campaign, automating a series of 5 emails for people who’d gone through a 15Five trial without converting. They received the first email 4 weeks after their trial period ended, and an email every two weeks thereafter until the 12th week.

Luke started by sending some manual emails before setting up the drip series. “This allowed us to measure the effectiveness of the campaigns before automating drip emails,” says Luke. For example, he tried targeting trial users who hadn’t converted over a six-month period to get the timing right before settling on the 4-to-12 week window. 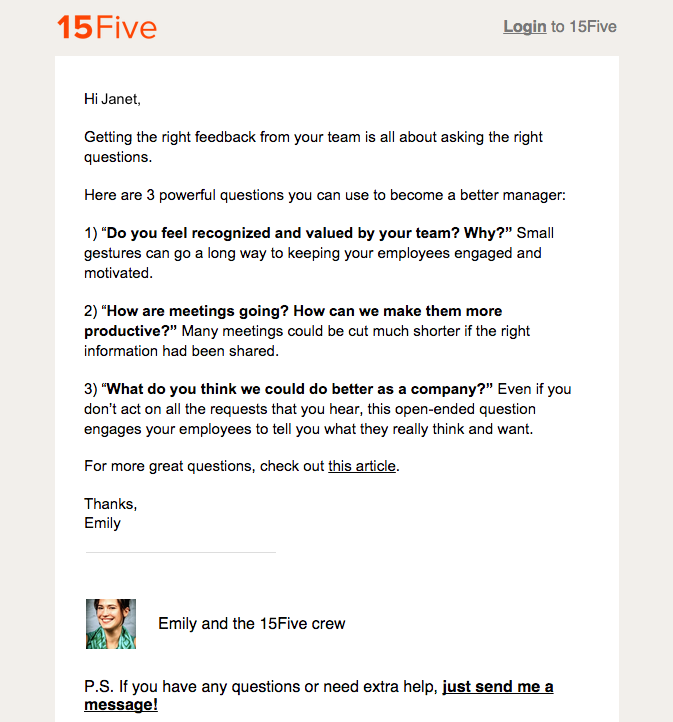 the 1st email in the series

The emails are personalized, crisp, and helpful — all centered around how managers and teams succeed, with links to content not just from the 15Five blog but other sources too. While the content aligns with what 15Five does, its focus isn’t on the company but on the recipients and how they can be more successful at their job.

Sending the email from a real person — Customer Success Manager, Emily Diaz, whose photo is in the signature — and including a postscript call-to-action to get in touch also reopens a direct line of communication. Luke notes, “There was definite validation in seeing how many people took time to reply with a quick thanks, or some interesting questions that sparked an opportunity for us to provide additional value.”

Here are a few things to keep in mind when creating soft winback campaigns for your lost trial users.

How long has it been since you’ve been in touch? If too much time has gone by, you risk spam complaints and annoying people who don’t remember who you are in the first place. Generally, 6 months is probably as far back as you want to go — but do some manual testing to feel out the effectiveness of your timing.

2. Get the segment right and preach to your choir.

First of all, make sure you’ve segmented your recipients correctly so that people aren’t mistakenly getting messages that mention that it’s been awhile.

You’re targeting a very particular group of people who are somewhat but not very familiar about you. So don’t treat them like strangers, and don’t forget that you have some data and insight about this particular audience because of their initial trial interest. What topics are they interested in? What goals do they have? What would encourage people to stay in touch with a company whose product they’ve tried and didn’t continue using?

Also consider segmenting recipients into narrower slices based on their actual engagement with your product. You could have different campaigns or strategies depending on people’s engagement level during their trial period. It may be smarter to target people who tried a few features over the trial period or completed an activation goal rather than those who signed up, never tried anything, and never came back.

3. Build a series of emails.

According to research from ReturnPath, sending multiple win-back messages was more effective than only sending one. They found that while people may not read the initial email, 45% of them read subsequent messages. ReturnPath’s study focused on retailers, but the effectiveness of email series aiming towards a single goal applies to other types of businesses as well.

Again, you can further segment based on people’s level of engagement with your emails. For instance, you could have a reengagement series like 15Five’s but have engaged readers end up with a special offer or encouragement to sign up for your newsletter (since you can’t continue emailing trial signups forever).

Sometimes people just aren’t ready to buy within that trial period — and providing helpful, interesting content can keep people in your audience.

As Luke learned over at 15Five in his biggest takeaway, you don’t need fancy, big announcements or a stream of noisy sales to keep people engaged. He explains, “For the most part, your old leads are happy to hear from you if you are proving them with useful, short emails. When they are ready, they will return to the product.”

Over to you! What tactics have you tried to reengage leads or unconverted trial users? Share with us in the comments!