Avoid the Cookie-Cutter Approach to Email Marketing to Increase Conversions

VideoBlocks has A/B tested millions of emails — and that’s just since 2013 when Bill Zhang joined the company as its director of lifecycle marketing. What has he learned? “Every rule that they say is a best practice, I can give you five examples of why it’s not,” he reports.

Testing is huge at VideoBlocks, which provides a subscription service for downloading stock video, backgrounds, and effects (its sister sites, GraphicStock and AudioBlocks, provide images and sound). In fact, being data-driven is a stated company value — and it’s this approach centered around data, testing, and iteration that’s helped build this fast-growing, multimillion dollar company. 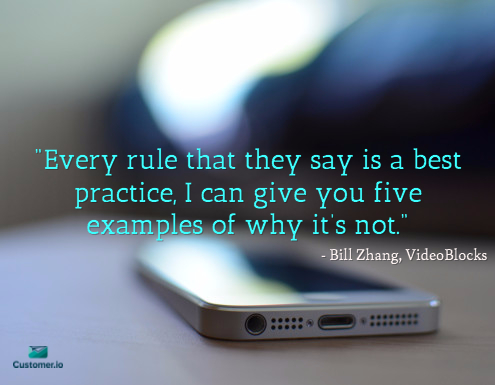 “We test something and if it works, we go with it, even though it might be the most ugly creative or template,” Bill explains. For VideoBlocks, continuous email testing is a way to listen, find out what the customer wants, and keep steering towards more relevance — which, of course, is the key to successful email marketing.

What VideoBlocks Learned from Testing Millions of Emails

Typical advice for emails is to keep them short, limit choices, and direct recipients towards clear calls-to-action.

But through testing, Bill found that for GraphicStock, this didn’t hold true. Here’s one of their lifecycle emails:

“It’s a long template,” Bill explains. “It has eight huge banners and takes about two or three scrolls on the mouse, so it’s not a direct one-button, one-CPA, click-now type of email — but it converts at twice the rate as some of our other emails.”

For some onboarding emails, the company features a customer representative’s face in the signature to humanize the message and to help build trust with new users.

They A/B-tested whether showing a female or male customer representative would make an impact. The answer: it depends. It turns out that for Videoblocks, the female picture won, and for GraphicStock, the male picture won. 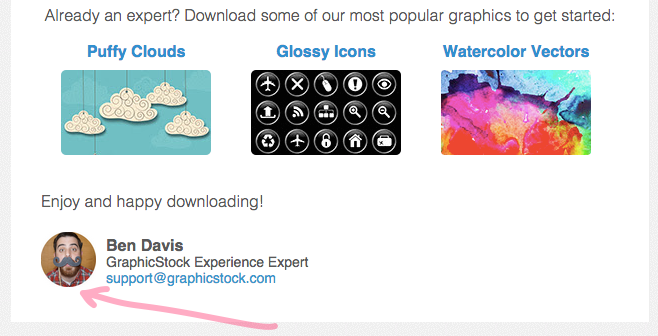 Often, marketers want to get clever or pique curiosity in email subject lines to grab readers’ attention amidst the sea of inbox message. But sometimes, the simplest approach wins.

Bill reports, “We found the hierarchy is that direct response [copywriting] is the best — it’s ‘Come get your free stuff or ‘Download these awesome things.’ Second are pun-ny, humorous, funny subject lines.”

Take Advantage of Your Own Data

Sure, VideoBlocks’s testing results in interesting insights about email marketing – but more importantly, the practice sheds light on their customers.

When first creating drip campaigns for GraphicStock, for example, they basically plugged in what they’d been using for VideoBlocks users and just changed the logos. “They didn’t do very well — no surprise there — because it’s a totally different audience,” Bill laughs. “But we were like, ‘Hey, it’s the same business model. Why can’t we just do the same thing?’”

After digging into why they were seeing such contrasting results, they realized that GraphicStocks users — many of whom downloaded images for smaller-scale use, like a PTA newsletter or an Etsy shop banner — needed more proactive guidance. In contrast, the self-sufficient video crowd required a lighter touch.

The topic of email testing often gets wrapped up in all the things you can test — but the whole point of the practice is to use it to listen to, learn about, and ultimately deliver more value to your customers. It’s s continuous feedback loop.

As Chad White from Litmus points out, you gain some of the best knowledge about how to drive results by turning to what’s already in front of you:

[T]he data that is most relevant to your company’s future success is your own data. Especially in the Age of Big Data, marketers have tons of information about their subscriber and customer behavior at their disposal.

Bill agrees. “It’s about being patient and not just taking a cookie-cutter approach. Saying
‘Apple does this, or Amazon does this, and therefore I’m going to do the same thing,’ can just lead to it tanking, and you don’t know why.”

What lessons have you learned lately about your audience from A/B testing emails? Share in the comments!