The Science Behind How to Win Influence and Persuade Subscribers

I feel uneasy asking people to keep an eye on my belongings at coffeeshops. But nature will call as I inevitably consume many-a-latte, and risking the loss of valuable cafe real estate often overpowers my caution. So I’ll lean over to a table neighbor and ask, “Could you watch my laptop while I go to the bathroom?” and they usually say yes.

As a remote worker, I frequent many cafes and I’ve always wondered whether this request makes any difference until I read a classic study by psychologist Thomas Moriarty.

The summer of 1976, Moriarty and his associates headed out to Jones Beach in New York for some sand, sun, and experiments. One researcher would set down his towel on the beach, turn on a portable radio, and after a few minutes, ask a nearby sunbather to watch his belongings while he checked out the boardwalk. Most people agreed — and their word was tested as another researcher, posing as a thief, would run by and snatch the radio.

A whopping 19 out of 20 sunbathers who’d given their verbal commitment chased the thief and yelled for him to stop. When there was no request made, however, only 4 out of 20 people gave chase.

There’s often more to persuasion than one conversation or points in an argument. You have to understand what makes people tick when you want them to tick in your favor.

That’s why persuasion is such a communication superpower — you can actually change someone’s behavior. In fact, psychologist Robert Cialdini calls persuasion tactics “weapons of influence.”

Cialdini is the veritable authority on persuasion. While Cialdini’s Influence is a book that’s launched many a marketer’s blog post and strategy, here’s an overview of his 6 persuasion principles and ideas for how you can wield these weapons of influence in your email marketing efforts.

When somebody does something nice for you, you want to return the favor.

Cialdini mentions a simple study in which university professor Phillip Kunz sent out holiday cards to people he’d never met. To his surprise, many sent him cards in return. “And I was surprised by the number of letters that were written, some of them three, four pages long,” he told NPR’s Alix Spiegel.

The first mover to offer something nice, even as a stranger, creates a sense of obligation. Kunz and his family even continued receiving holiday cards from those strangers for 15 years.

Offer free helpful content like ebooks, guides, and webinars to persuade people to join your email list. Help Scout, for example, provides its resources without making you opt in to a list, which can be more effective in getting people who do subscribe to actually convert later on since it feels less like a quid pro quo exchange.

Once people make a choice, they’re motivated to stick to that stance because they want to appear consistent.

The beach thief study demonstrates this principle in action. If you can get people to commit to something, they’re much more likely to act in accordance with that commitment. According to Cialdini, this principle is most effective when commitments are taken as a personal responsibility, or “active, public, and effortful.”

You have the opportunity to create a kind of script by architecting people’s choices. Or you can increase engagement by having them set their own commitment goals.

Take those pop-ups that appear on blogs. Instead of having an option to close the modal, you’re made to choose yes or no, with the “no” option expressing an undesirable result. 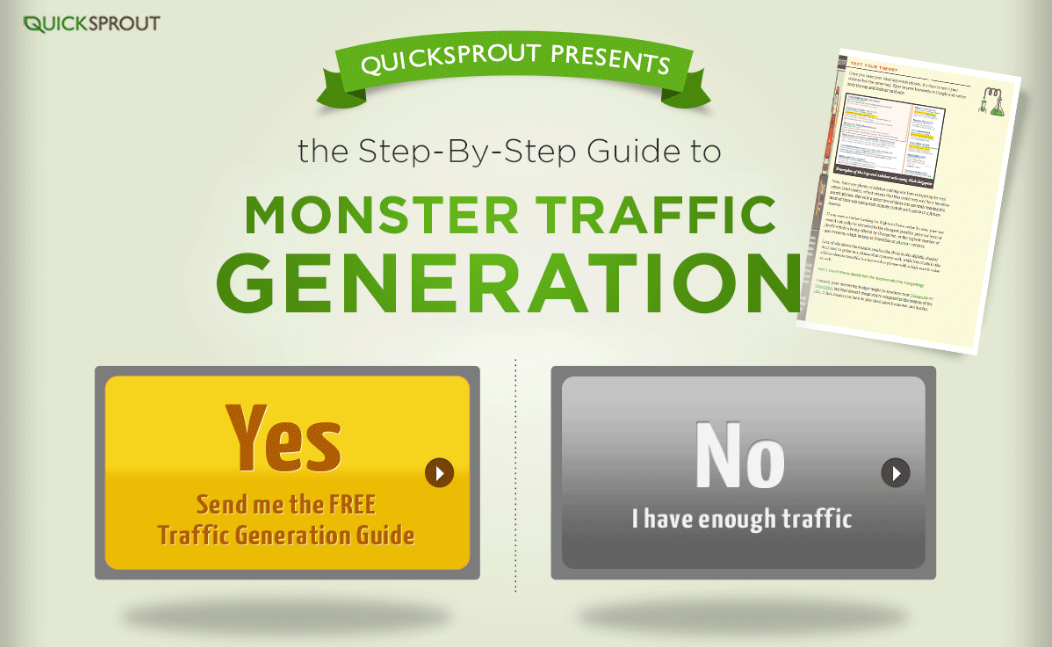 Even if you rationally understand the underlying psychological design, it’s still tougher to choose “No” than click on a neutral X to close the pop-up.

Monkey say, monkey do — especially when you want to fit in with a certain community or culture.

One of Cialdini’s own studies shows how consensus motivates. His team took those cards in hotel bathrooms encouraging guests to reuse their towels and simply tweaked the wording. Instead of a typical plea to help save the environment, the message declared that the majority of hotel guests reused their towels and proposed: “Join your fellow guests in helping to save the environment.”

The result? Reuse of towels rose by 26%.

The consensus tactic is itself popular. We’re convinced to buy bestsellers and read the most popular articles. I even caught myself wanting to highlight this passage from Influence because of social proof.

Show subscriber numbers to prompt email list signups. Don’t have enough numbers to boast? Try the bestsellers tactic with Derek Halpern’s suggestion: place your signup form near a collection of “most popular posts” — which implies consensus and “street-cred.”

If you like me, you’re more likely to say yes to me.

Liking is a vital step towards building trust, lowering the bar to successful persuasion. Showing your personality can go a long way to connect with people — and it’s surprising how little time organizations invest in doing so.

Slack does an awesome job of expressing a likable voice. Whether it’s an encouraging message while the app loads, the conversational release notes, or their emoji-happy tweets, the company sounds like it’s composed of some delightful people. While Slack’s fandom results from a deep care in overall user experience design, it’s no mistake that their copy is so winningly human.

Don’t wait to establish a rapport. Lumosity, for example, sets themselves up for a friendly relationship from the moment you type in your email address. 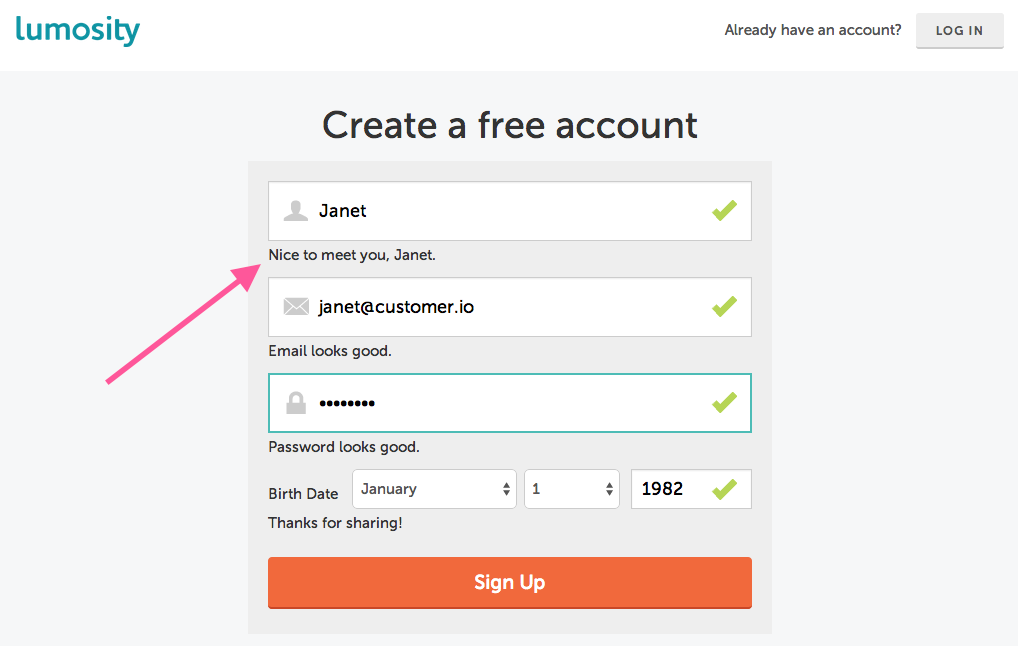 Are your emails written and visually designed to be likable? Do you express your message like a real person? It’s impossible to like generic automatons who blast you indiscriminately with email.

We tend to obey authority figures.

Authority fuels the use of celebrity endorsements, expert testimonials, and case studies of well-known companies. It’s why 9 out of 10 dentists are always recommending a toothpaste and Influencer posts on LinkedIn outperform everyone else’s.

All it takes is an indication of status — a uniform, a fancy title, some popularity — for people to follow your lead. Remember the Christmas card experiment? When Kunz signed the cards as “Dr. and Mrs. Kunz” rather than “Phil and Joyce,” the response rate increased from 15% to 26%.

As with liking, authority is a long game when building up your own. Still, simply indicating your status can increase your persuasive powers. A personal welcome email from a CEO will be much more convincing than one sent out by the summer intern.

People want what they can’t have — especially when other people have it.

As Cialdini puts it, “The feeling of being in competition for scarce resources has powerfully motivating properties.” Competition for a scarce supply not only raises perceived value and desirability, it also creates a sense of urgency to act fast.

Limit time or supply to increase your “yes” rate. Emphasize scarcity in an email subject line for a quick persuasive boost to open, such as this email from Amy Hoy’s list over the holidays pushing a book bundle: “2 hours left to save 73%! from me, Brennan & Nathan…” 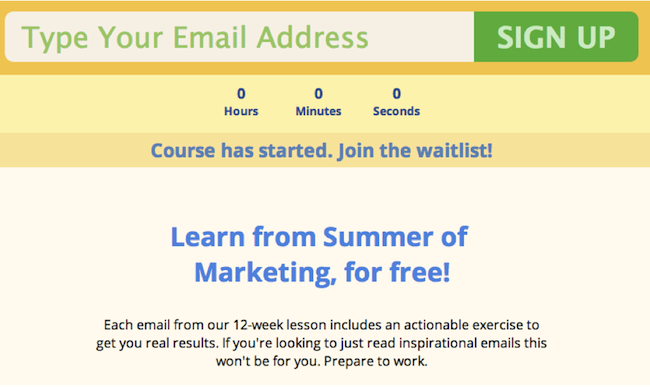 When AppSumo’s Noah Kagan created a free email course on marketing, he only allowed a 7-day enrollment period and then created a waitlist for a subsequent round. With this scarcity tactic, he helped triple his email subscribers for his marketing blog OkDork.com from 12,000 to 50,000.

Persuading others, of course, isn’t only a marketer’s job. Whether you’re trying to convince your boss for a raise, getting friends to help you move for the umpteenth time, or cajoling a receptionist into letting you squeeze into a full yoga class, you’re engaging in the art and science of persuasion.

According to Daniel Pink, we’re basically selling all the time: “We’re persuading, convincing, and influencing others to give up something they’ve got in exchange for what we’ve got.” And that can be made much easier when you understand Cialdini’s persuasion principles. Think back to how just getting someone to say yes to watching your belongings can get them to follow through 95% of the time.

To sell, argues Pink, is to be human, because the “ability to move others … is crucial to our survival and our happiness.” And to succeed at marketing, that ability to convince others, to move hearts and minds, is no less crucial and should be no less human.

Do you use any of these persuasion principles in your marketing efforts? Share with us in the comments!