The Psychology of Upgrade Emails: Make Something to Lose

Here’s an interesting scenario. Let’s say you have the chance to win $200 if a coin toss lands on on heads, but if it came up tails, you’d lose $100. Would you take that bet?

Nobel-winning psychologist Daniel Kahneman poses a similar question to both his students and other classes of folks alike:

I say: ‘I’m going to toss a coin, and if it’s tails, you lose $10. How much would you have to gain on winning in order for this gamble to be acceptable to you?’

People want more than $20 before it is acceptable. And now I’ve been doing the same thing with executives or very rich people, asking about tossing a coin and losing $10,000 if it’s tails. And they want $20,000 before they’ll take the gamble.”

Why does this happen? People hate losing more than they love winning — and it turns out this very human tendency can impact the success of your business.

The Surprising Value of Loss

Not wanting to let go of what you think is yours is a powerful emotion. That feeling of resistance and protest of “it’s mine!” bends the rational decision-making process. This is called loss aversion, which Kahneman defines in Thinking, Fast and Slow as:

a powerful conservative force that favors minimal changes from the status quo in the lives of both institutions and individuals …. it is the gravitational force that holds our life together near the reference point.

That magnetic tug occurs, even with something as trifling as a coffee mug. In 1991, Kahneman and his colleagues performed an experiment to examine the differences in valuation that can result from loss aversion.

In the study, participants were randomly designated as sellers or buyers. Sellers got a mug that normally sold in the store for $6.00. The researchers then asked the sellers what the minimum amount they’d be willing to accept to sell the mug and asked buyers the maximum price they would pay to purchase the mug.

Buyers were willing to fork over a maximum of $2.87 for the coffee mug. Sellers, on the other hand, wanted at least $7.12.

Sellers were parting with something they possessed — even for such a short time — and due to that loss aversion, they valued their mug much higher than the buyers did. That’s the endowment effect at work, the tendency for people to assign more value on things simply because they own them.

The “but it’s mine!” feeling hiked up the perceived value by more than double.

The Key to Loss Aversion in SaaS Trials

If you have a free trial for a SaaS product — the kind where an upgrade is required to continue use — loss aversion naturally comes into play. You’re relying on the psychology of free trial users to feel resistance against losing something they have, increase their desire to keep using it — and pay for the ability to do so.

But wait, you might be thinking — then why do so many people sign up for a free trial or freemium account but never convert? Where’s all that helpful loss aversion?

There has to be a feeling of ownership in place first. If trial users don’t realize value and attain that “this is mine!” feeling, there won’t be anything to really lose to fuel motivation to convert.

In addition, there’s more to loss aversion than the mere possibility of deprivation. The type of loss matters too.

As Kahneman and his colleague Nathan Novemsky note, loss aversion seems to spring from “benefits rather than on attributes of goods.” That means if you have things with different attributes but the same benefits, loss aversion doesn’t really come into play. To illustrate, think about upgrading your computer or car:

For example, there is no loss aversion for an old car that is traded in as part of the purchase of a new car if the new car is perceived as having all the benefits of the old one.

Your job isn’t over when somebody signs up for a trial or free account. What are you doing to deliver value and benefits once that has happened?

3 Persuasive Ways to Use Email Marketing, based on Loss Aversion

Loss aversion is a common tactic used in upgrade emails sent out towards and at the end of a free trial. You can also employ loss aversion if you have a freemium model or would like to nudge more customers to higher pricing tiers with additional features beyond increased space or volume limits. Here are three quick examples:

SaaS businesses with freemium models, like Datahero, often start people out on trials with premium features and then switch them over to the free plan if they don’t upgrade.

Wistia also starts people off with premium features to “test drive.” Here’s how they invoke loss aversion in their final trial notice email: 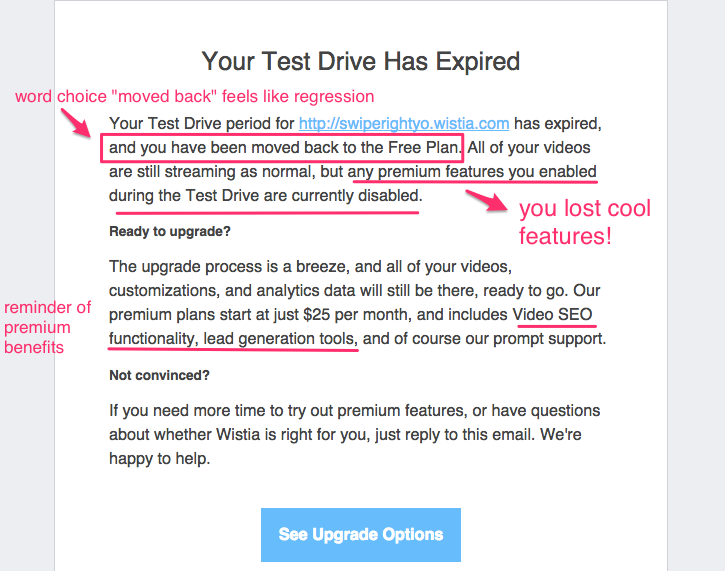 Followup.cc leans heavily on loss aversion in its upgrade email, after starting you on a free trial with premium benefits. 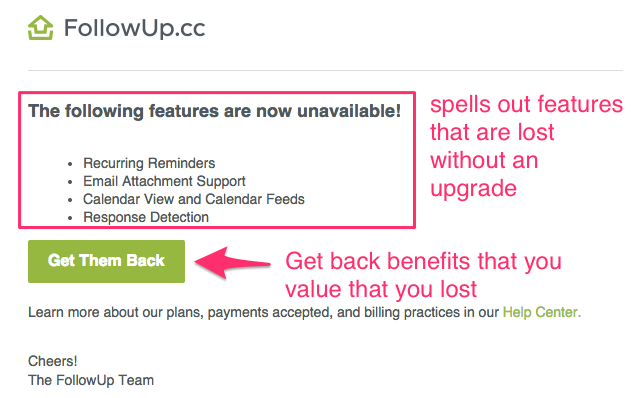 Given what we understand about loss aversion, this email could have been even stronger if it invoked the benefits, not just the attributes, of the premium features — reminding people that they could be losing powers to organize, be productive, and build relationships.

2. Offer a trial of a premium plan later on.

Whether it’s because you build premium features later on, want to reengage inactive users, or nudge potential power users — try offering a trial of a premium plan some time after the free trial.

This can make users feel special and incentivize them to really try your product in a more meaningful way than discounts and coupon codes. Here’s how Todoist frames the offer: 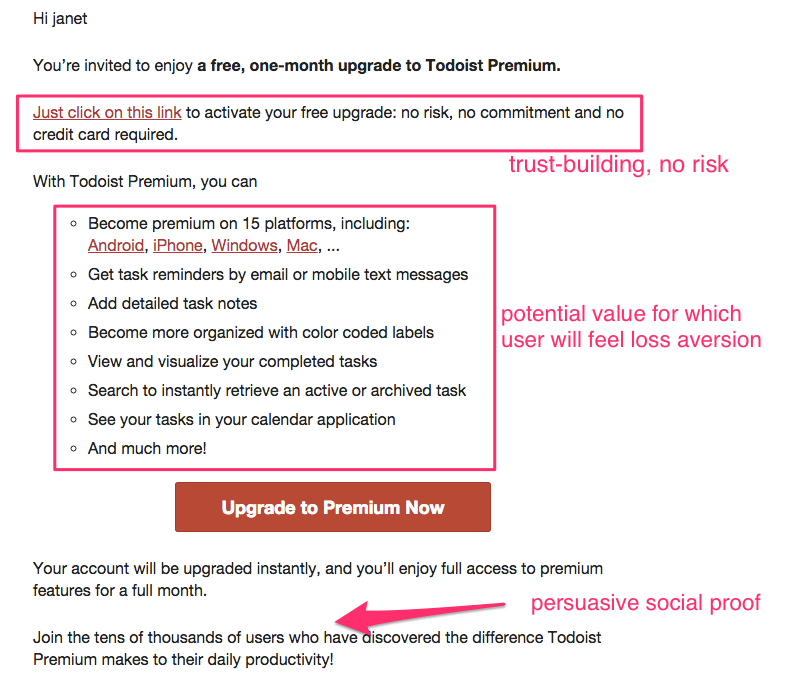 For this type of offer, you can employ the power of time scarcity as a persuasion tactic. Here’s what Strikingly does, with the urgent subject line, “24 hours left to get Strikingly Pro for free”:

3. Give a trial of a special premium feature.

There may be certain features that push people to really adopt your tool and become power users — whether it’s advanced search capability or access to useful tracking and reports. For Buffer, their absolute number one feature request was to include Pinterest sharing.

The new feature is only available with paid plans — but the Buffer team chose to give their freemium users a chance to try out the feature and experience its value. 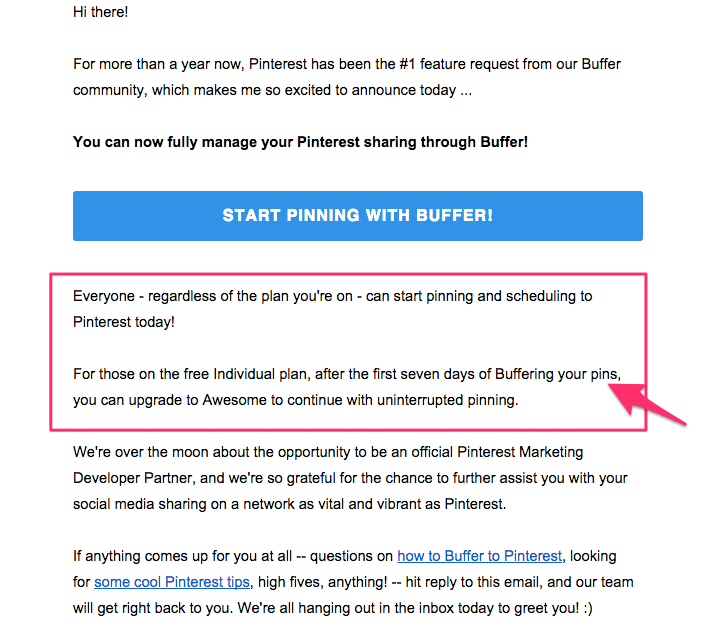 If you have a major feature release like this that you know has great demand and impact, consider treating the feature like its own product.

Loss aversion is a cognitive tendency that helps convince people to become customers or even upgrade to higher plans. But there are meaningful prerequisites: users must realize benefits, not merely experience attributes — so much so that they feel a sense of ownership.

That calls for proactive work on great onboarding and activation during a trial period to engage, build trust, and help people succeed so that they experience real benefits and value — so that there is something to lose.