5 Ways to Reverse the Curse of Knowledge

You overestimate how much people understand you. It’s that simple.

Psychologist Elizabeth Newton’s 1990 study is a perfect example of how the curse works its counterproductive ways. She split people up into two groups — tappers and listeners. Tappers chose a song from a list of 25 common tunes (think “Happy Birthday,” “Mary Had a Little Lamb,” “Twinkle Twinkle Little Star”) and then tapped out the song’s rhythm with their knuckles. Listeners had to guess the song.

Now, tappers were rather confident about their fellow listeners, predicting that they’d guess correctly about half of the time.

They were totally wrong. The listeners got the song right only 2.5% of the time.

The curse of knowledge led the tappers to outsized optimism, not to mention considerable vexation with their listeners. As Chip and Dan Heath, who wrote about this study in Made to Stick, explain: “Once we know something, we find it hard to imagine what it was like not to know it.” 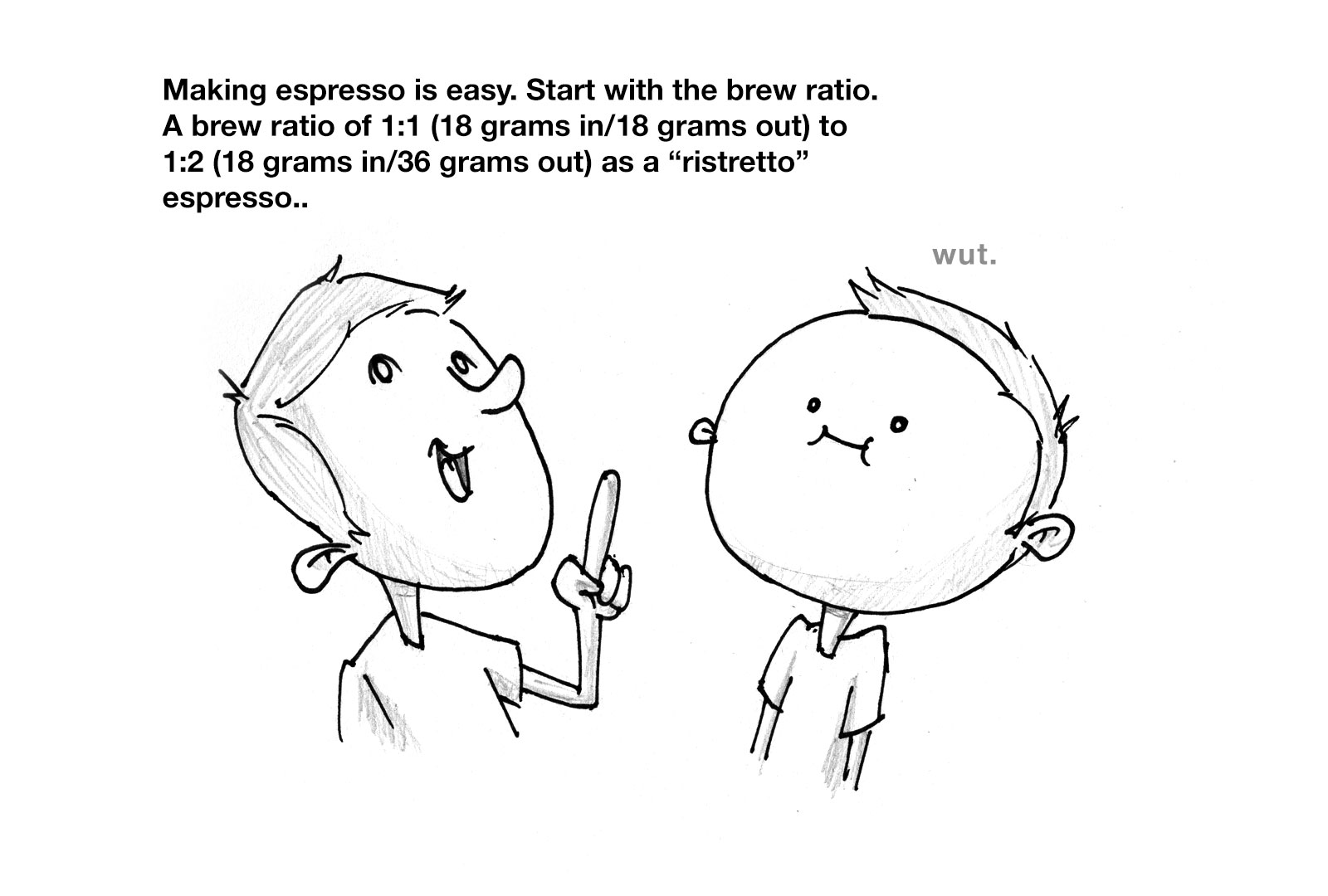 That lack of being able to put yourself in unknowing shoes is a hurdle to effective communication, leading to misunderstanding and disregard from audiences and frustration about why people just don’t get what seems so clear to you.

I’m Always On My Mind

The crux of Newton’s experiment is understanding how tappers heard the songs in their head as they tapped. Without the benefit of this inner soundtrack, however, listeners just heard a bunch of disjointed knocks.

You could be the most empathetic person in the world and still end up drowning in this gulf of missing context. Our egocentric human minds lead us to believe that we take up just as much mental space in other people’s heads as our own.

For companies, that’s a curse indeed. Take the common failure to follow up on an introduction when somebody gives you their email address. However excited people are to sign up for a shiny new app or subscription, they’ll soon forget about it if they don’t hear anything for awhile.

Yeah! My invite to use @robinhoodapp is on it’s way! Wait, what’s Robinhood again? #beentoolong

As with any valued new relationship, you don’t want the reaction of, “wait, who are you again?”

Even as you toil away on making something wonderful and amazing, if months pass by without a peep, you’ll end up eliciting more “meh” and “huh?” than enthusiasm.

As Newton’s study suggests, battling the curse of knowledge requires designing experiences that aren’t disjointed. Instead of relying on a passive “build it and they will come” approach or an egocentric “they’ll be happy to see me” attitude, the key is making connections, through developing concepts, stories, and relationships.

That’s how to be memorable.

As behavioral neuroscientist Gabrielle Weidemann explains, actively relating new information to existing knowledge “will help you in elaborating the memory and making connections between the bits of information…. The act of retrieving information helps to encode that memory better.’’

Joshua Foer, author of Moonwalking with Einstein, uses the Baker/baker paradox to explain how that process of elaborative coding works. Let’s say we show Jack and Jill a photo of a man. We tell Jack that the man’s last name is Baker and Jill that the man is a baker. After a few days, upon seeing the photograph again, Jill will be much more likely to remember the associated word “baker,” while Jack draws a blank.

Why is the lower-case word “baker” more memorable even when connected to the same face? There are many more mental associations with bakers — the smell of fresh-made bread, fine floury dustings, white aprons, tasty cakes — than with a random name, Baker.

It all comes down to richness of meaning. Foer elaborates:

It’s about taking information that is lacking in context, lacking in meaning and figuring out a way to transform it so that it makes sense in the light of all the other things that you have floating around in your mind…. If you want to make something memorable, you first have to make it meaningful.

How to Reverse the Curse of Knowledge

The first step to warding off the curse is to recognize that it exists, despite our best intentions. Psychologist Steven Pinker lays out the quandary:

Once you acknowledge the devilishness of the curse, consider these 5 ways to make your communication meaningful and memorable to reverse its effects:

1. Remind people why you exist.

Since the act of retrieving information helps strengthen memories, provide nudges and cues to reinforce who you are and why you’re around. That way you’re building deeper associations that feel more like lower-case baker rather than random Baker.

Take the simple welcome email, for example. Oftentimes companies send a nondescript “Thanks for signing up!” message, missing the opportunity to strengthen connections.

Slack uses its confirmation email to reinforce its mission and reiterate why you probably signed up for it in the first place. Who we are, why we’re here, and how we help you is super basic, but that’s information people need. 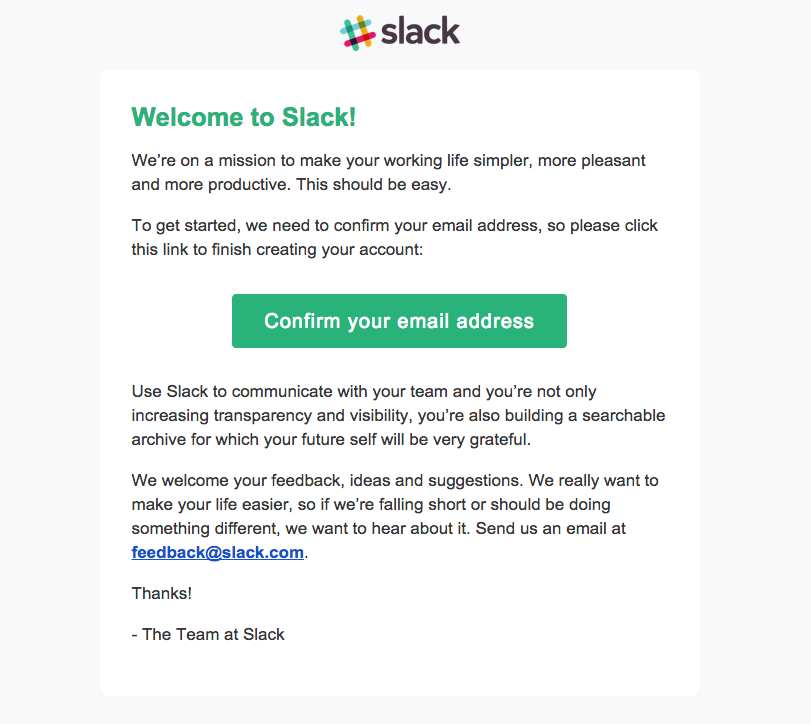 We remember the journey of Odysseus and the fate of Romeo and Juliet far better than we do some feature announcement.

Our brains are wired to remember narratives, even activating when reading vivid, sensory descriptions such as “leathery hands” and words like “lavender” and “cinnamon” as if we were experiencing them. Telling stories can be so engaging that it literally gets into people’s heads.

Focus on telling a story and you’ll cut through the curse of knowledge to naturally do away with jargon and buzzwords, paint scenes with concrete details, and convey meaning.

Don’t forget about the power of images and their exchange rate with words. They can encode more information and context at once. While plaintext might be great for a surprise personal email, including images like a company logo or people’s faces help tell your story. Or send people to a video that shows off your personality like Wistia. 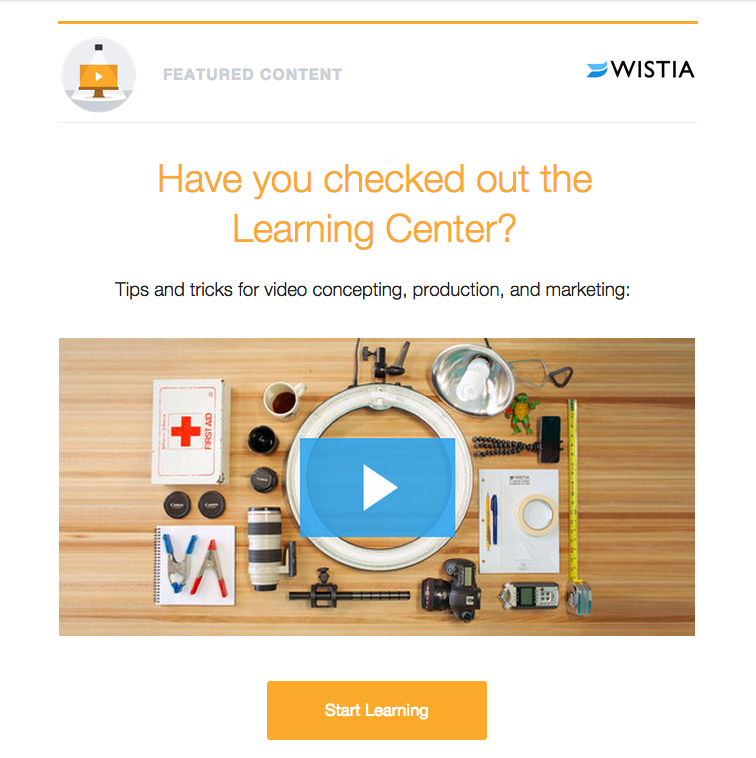 Remember, it’s out of sight, out of mind for your audience.

If you go silent for months, you’re setting yourself up to fail, because you miss valuable opportunities to build the trust, stories, and knowledge necessary for people to care whether you exist or not.

While radio silence at the start of a relationship spells doom, the solution isn’t about relentless nudges either.

Instead, pace yourself. Consider how cramming isn’t great for learning beyond the short-term. A more effective method is “spaced repetition,” used for language-training systems such as Pimsleur based on a series of graduated intervals. (Pimsleur’s: 5 seconds, 25 seconds, 2 minutes, 10 minutes, 1 hour, 5 hours, 1 day, 5 days, 25 days, 4 months, and 2 years.)

Similarly, try clustering the frequency of communication up front for new sign-ups, and then space things out and provide check-in points down the line.

Starting an actual conversation with someone certainly boosts the chances of getting on the same page.

Enter the surprise personal email from a real human being — often the CEO — saying hi and asking for your input with questions like “How can I help you?” and “What problem are you trying to solve?” 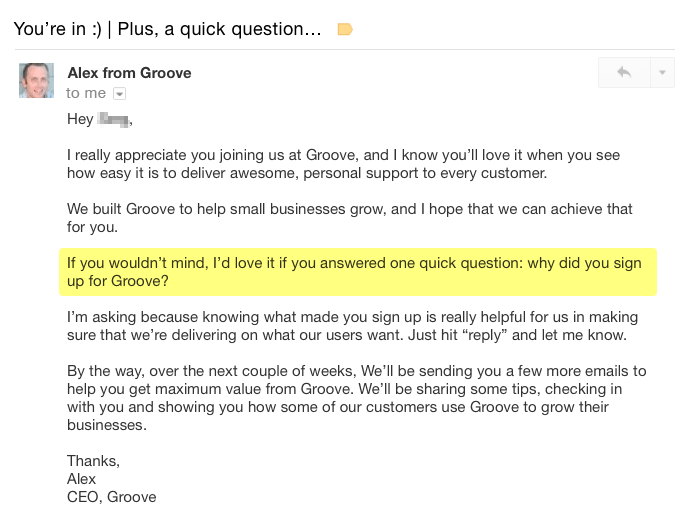 For Groove HQ, one of their most successful hacks is the surprise personal email, even as they grow their business beyond $100,000 a month. This one email helps establish a direct connection to the company right away — and people love it. 41% respond.

5. Get an outside perspective.

When you’re tapping out a message, you expect your audience to see and hear what’s in your head. The curse of knowledge even explains why silly typos are so hard to catch.

Psychologist Tom Stafford explains, “When you’re writing, you’re trying to convey meaning. It’s a very high level task.” As you write and proof, you already have the meaning you want to convey in your head, and because you expect it to be there, it’s harder to see if it’s missing — from a simple missing letter in a word to an integral missing paragraph that explains a thought.

That’s why editors, outside perspectives, and user testing are so valuable. They help you find where meaning and context is missing.

So are you delivering a bunch of random knocks when you communicate with people? Or are you giving them context, story, melody, and meaning to remember you by?

Have you ever encountered or experienced the curse of knowledge before? Share with us in the comments!