How to Master the Clickworthy Subject Line

Adam Grant, a professor at Wharton and author of the bestseller Give and Take, is a busy guy. Yet he’s incredibly responsive to email. In fact, he’s famous for his inbox superpowers, described in a New York Times profile as someone who doesn’t say no in the face of hundreds of emails a day and is “more reliable than Google and almost as fast.”

After the article came out, Grant received a flood of emails from thousands of strangers. When he realized that he “responded much more quickly to some emails than others,” he decided to share what worked best.

Number one on his list for getting read? Perfect the subject line.

Every subject line is a pitch. As Daniel Pink, who wrote the book on selling (To Sell is Human) clarifies, a pitch isn’t a summary of your whole message but a starting point — a request for someone’s attention:

So what makes you and busy folks like Adam Grant choose one pitch over another, in an endless sea waving for your attention?

Getting to Pitch Perfect

Researchers at Carnegie Mellon set out to find just that: how do people decide what to open?

First, they had study participants narrate their thought process while going through their inboxes. It became clear that two particular characteristics drove opens: utility and curiosity.

Utility as a motivator is straightforward yet powerful. When a message directly affects you — maybe it’s an answer or result you’re waiting on or an urgent email from your boss — of course you want to open it.

The useful email subject is specific, laying out details like where, when, how, or why — but specificity alone won’t do. Those specifics have to be relevant. Is there a promise or benefit? The prospect of a gain or loss? What’s in it for the reader?

While these straightforward subjects might seem boring, their clarity helps catch attention when people are scanning. Research from MailChimp found that newsletters with the highest open rates (60-87%!) had informative subject lines that simply describe the email’s contents. 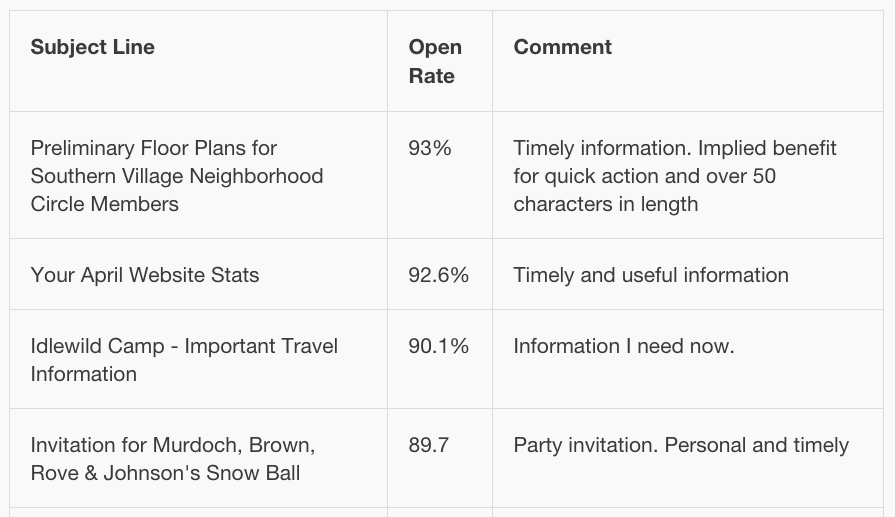 Here are some more examples of utility subject lines I found in my inbox:

The researchers were surprised to find that curiosity also drove people to open emails. When people perceive a gap in their knowledge, they naturally want to fill in that information. Encountering an email with an unpredictable message can provoke an information gap that drives you to satisfy your curiosity by clicking to open — which is why posing a question in a subject line is often effective.

Here are some examples of curiosity subject lines I found in my inbox:

Marketers often employ information gap theory to create clickable headlines, but email subject lines are more complicated. There can’t be too much of a gap. Curiosity should be prompted either around the email contents or the sender but not both. Sure, the famous “Hey” subject line worked because it piqued people’s curiosity — but the fact that the email was from Barack Obama played a crucial role in that email’s success.

When uncertainty exists regarding both the email contents and the sender, curiosity won’t be enough to drive opens.

A random, potentially spammy or irrelevant email from a stranger is the last thing people want to open. Keep that in mind, especially in the beginning or reconnection phase of an email relationship, such as a welcome email. A “We miss you” subject line might pique curiosity, but if you don’t know or remember the sender, you really won’t care who misses who.

It can be difficult to combine both utility and curiosity into one subject line, as they exist somewhat in opposition. If you can tell from your inbox that a message will be relevant and useful, the less of an information gap there is. According to Pink, combining the two tactics might even be counterproductive because that mixes different types of motivation.

Still, conveying utility while prompting the feeling of “what next?” can be quite effective. This newsletter subject line from Patrick McKenzie, for example, suggests utility (I want to make $200 a recipient too) and curiosity (how do I create this magical email?).

When choosing between the two options however, it’s best to go with utility.

In a followup experiment, the researchers wanted to examine people’s inbox-processing in a more realistic setting with competing demands for attention. Rather than the peaceful bubble of the think-aloud exercise, participants took on the role of a temp sitting in for a conference planner out on a sick day.

They found that when people experienced email overload, their scanning process became more ruthless. Curiosity lost its motivating power while utility became even more integral to catching people’s attention. When you’re busy, you don’t have as much mental power to spare on filling information gaps. As the study authors explain:

curiosity may be a more deliberative motivation requiring cognitive or perceptual resources, diminished when an individual feels stressed or time pressured.

Use the timing of your email to guide whether you decide to unleash the variable power of curiosity. Sending a newsletter or promotion out on the weekend is probably a smarter time to pique people’s curiosity because they’re dealing with less inbox craziness.

Otherwise lean towards utility when writing your subject lines, especially when you’re sending emails to busy people. Relevance is itself a valuable signal that cuts through noise.

A few additional things to keep in mind when considering utility and curiosity for subject lines:

The importance of subject lines seems both obvious and underappreciated. Your pitch not only affects open rates but the perception of what’s in the body of the email. Yet we still often treat them as throwaways or afterthoughts — perhaps because we largely experience subject lines as consumers, scanning so quickly with our lizard brains.

The trick to getting subject lines — and email in general — right is to consider your audience first. As copywriting expert Joanna Weibe explains:

If you’re not intriguing the reader, if you’re not giving them one thing that they need — one point that they absolutely have to get, targeting a pain or showing some sort of delight — then your subject line is probably going to fall flat.

When the subject line falls flat, the whole point of your email falls apart.

What’s the best subject line you’ve sent or received? Share with us in the comments!