The One Power Word to Persuade Them All

“Because you’re worth it.”

This famous slogan by the cosmetic company L’Oréal’s uses one of the most powerful words in persuasive copywriting — “because.”

Humans crave reasons and resolutions. Ever since you are a small child, you want to know “why?” The master of persuasion, Robert Cialdini, explains why that basic desire drives action:

A well-known principle of human behavior says that when we ask someone to do us a favor we will be more successful if we provide a reason. People simply like to have reasons for what they do.

When you lose motivation with a task or job, you may find yourself asking “why am I even doing this?” in the first place. Reasons equal motivation, including motivation to click through, reply, comply with your request, or even do you a favor.

So are you making the most out of the power of “because” in your emails?

The Surprising Power of “Because”

People aren’t even choosy about their rationales for behavior, as Harvard psychologist Ellen Langer found in a famous 1978 study.

Langer and her colleagues wanted to see whether people would let someone skip ahead of them in line at a busy library copy machine. They asked people three request variations. Take a look at the success — or conversion — rate for each question:

It makes sense that not providing a reason performed the worst — simply asking without a justification makes you look presumptuous. But surprisingly, giving the meaningless, redundant rationale of “I need to make copies” did nearly as well as a legitimate explanation. In this scenario, the mere existence of a rationale increased the likelihood of success by 55%.

Still — the power of “because” by itself has its limits. When the line interrupter announced that they needed to jump ahead to make 20 copies rather than 5, people became much more critical about the reason’s substance.

Once compliance with the request required a modicum of effort on the subject’s part, thoughtful responding seemed to take the place of mindlessness, and the reason now seemed to matter.

Almost any explanation motivates — but the bigger the ask, the more the quality of your reason matters.

Because Persuasion Requires a Bridge

So now you know that we, humans, will use almost any reason to justify our behavior — but that a quality reason is most compelling.

“Because” is the conjunction that connects your goal to the reader’s motivation, putting everyone on the same side. The takeaway here is not necessarily to go heavy on the word “because” in your copy as a quick-fix formula — but to carry out that connective reasoning that bridges the gap between intentions. Emails and calls to action fail to convert when they fail to take the reader’s perspective into consideration.

Your reader is the protagonist, the VIP, the star. L’Oréal’s enduring pitch isn’t that their cosmetics are worth it — it’s that their customers are awesome. Give reasons that resonate with readers so that they’ll follow your request and become loyal customers:

Despite being the participant of many-a-power-word list, “because” doesn’t seem very common in digital copywriting. Try testing using the word “because” in your emails and copy to motivate people to comply with your call to action.

example of a CTA from Copyhackers using “because”

Now let’s dig into some examples of how you can use the power of “because” in your emails:

This cart abandonment email from Dot & Bo provides the good ol’ Cinderella rationale to act quickly — “because this code expires at midnight” within 2 weeks. 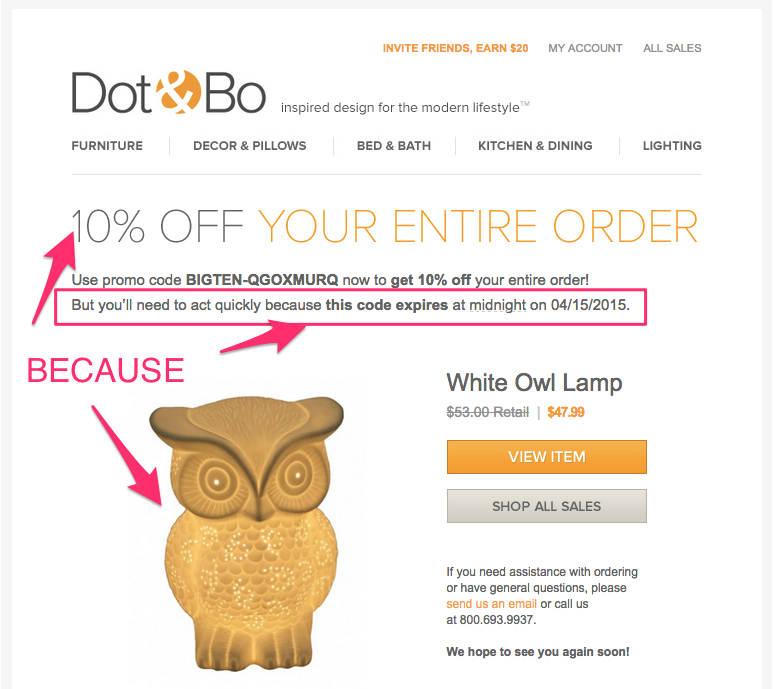 The limited time discount is not the only “because” factor in this email. The cute owl lamp is not a random product but something I left in my shopping cart before leaving the site. This customization based on my behavior makes the message feel relevant and that this call to action is for me rather than any ol’ Joe Schmoe.

ePantry provides a subscription service for sustainable household products. Their brand revolves around their mission to prioritize customer happiness and, as a B corp, social and environmental good. This strong company identity and purpose provides many reasons for customers to bite.

This email with the subject line “We do things differently” is no exception. 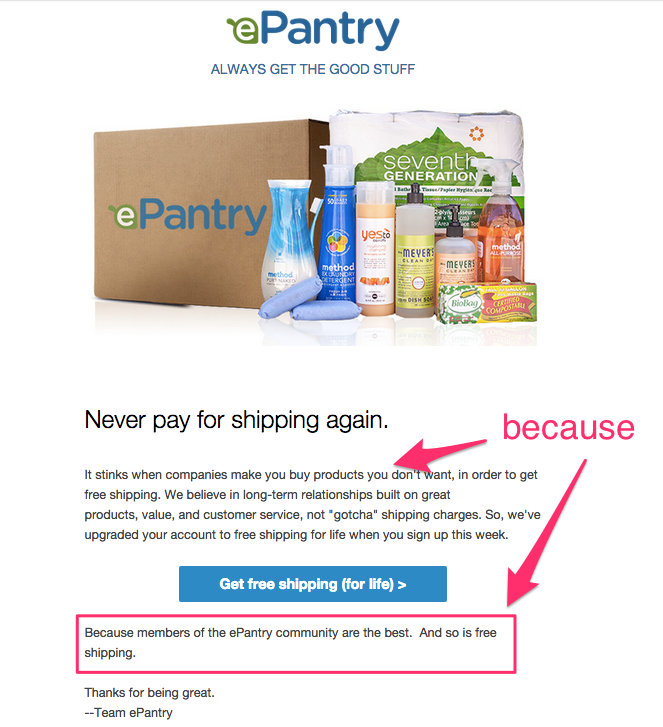 This is a good example of the “because I have to make more copies” rationale. While I don’t doubt that ePantry believes its community members are the best, that reason is also not specific or compelling on its own. It works, given the company’s consistent mission and messaging, the sweetener incentive of free shipping, and the feeling of special treatment — a mix that has worked so successfully for companies like Zappos.

Stitchfix offers affordable personal styling services for women. As part of the sign up process, you have to fill out a personal style profile to share your sense of taste, budget, size, and lifestyle. Instead of bugging me right away with a generic “please complete your profile” nudge, Stitchfix sent me 4 reasons to get moving from happy customers. 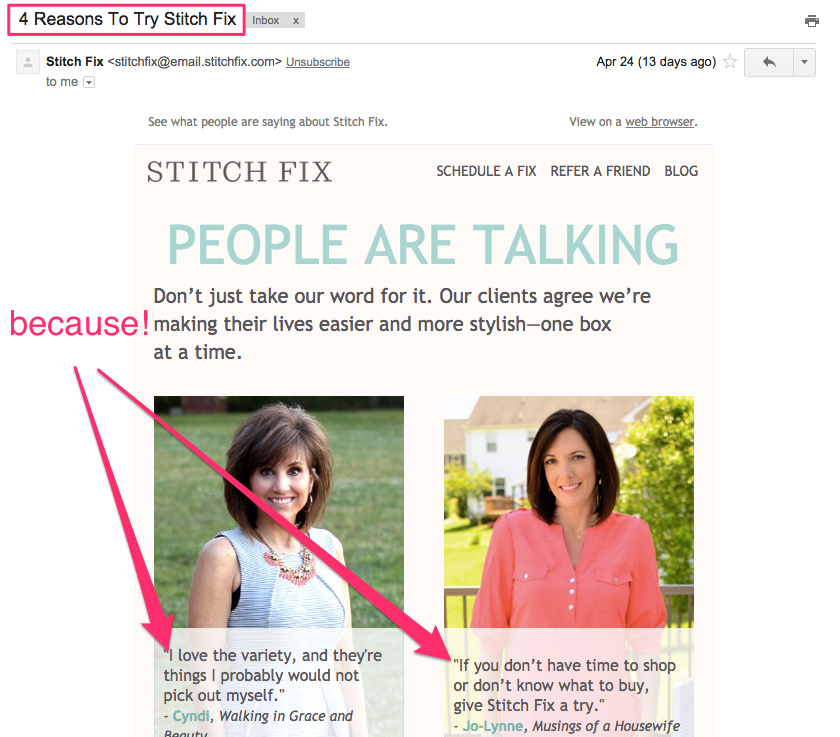 Your happiest customers have already found reasons that resonate — and they’ll probably say it best.

In its newsletter, Unbounce sends updates on their newest, best content. In a smart move, the company also connects its content audience to its product by including a call to action in every postscript. 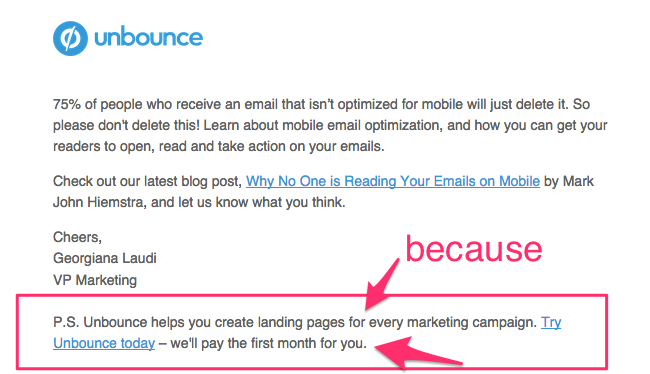 While there’s no explicit “because” statement — there’s a reason (Unbounce will help you solve the problem of creating marketing landing pages) that leads right up to the pitch to “try Unbounce today.” Notice how they follow through with what sounds like an incentive. “We’ll pay the first month for you” sounds like a more compelling reason to act than the usual “free trial” angle.

Don’t make an unjustified request that sounds like a presumptuous command or comes off as worthless noise. People like having reasons for what they do, and as one wise giant robot dinosaur says:

EVERYONE CARE ABOUT SELF FIRST. TAKE HINT. CARE ABOUT THEM FIRST TOO.

WHOLE POINT OF COMMUNICATE? THEM. WITHOUT A THEM THERE NO COMMUNICATE. IT JUST OTHER WORD END IN “ATE”.

For marketing emails — and any emails really — where you’re asking people to do something, give reasons. Because you’re worth it. Because awesome.

What’s your experience with conversion when using the word “because”? Share with us in the comments!