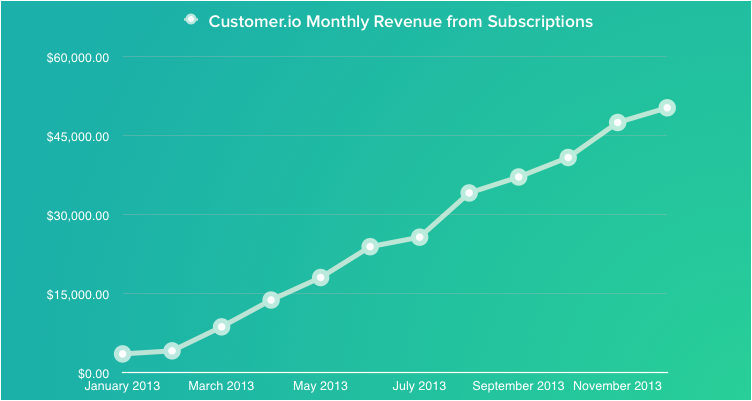 When we look back on the year, there has been a tremendous amount of positive change since this time in 2012. In no small part due to our customers, investors and supporters who recommend our service to friends and colleagues. Here are some of the key stats we look at and how they’ve changed:

How we got here

We took additional angel investment in January 2013 and used that to fund operations through the year. We’re now looking to be cash flow positive in early 2014 with cash reserves of $200,000.

We won’t be pursuing additional rounds of investment. Our plan is to grow the business on revenue. We have every indication that we can do that.

Changing into a virtual company

Over the past few months we’ve been experimenting with a remote team. We’ve grown in confidence of that strategy and we’re now committed to growing remotely.

We hired our first full time remote employee to start January 1st, 2014. Diana is based in Vancouver, WA. John (CTO and co-founder) will be a digital nomad for 2014. Over the past few months we’ve put the systems in place so we can be productive as a team no matter where everyone is.

We’ll plan to have a home base where our distributed team can all gather — inspired by the 37signals office in Chicago. Looking at commercial real estate prices, New York is an expensive place to build that home base. We’re looking at alternative cities to relocate the company HQ.

On this day last year, John and I had switched our salaries to minimum wage and were working on a contracting project to get cash in to the company. All this just to make sure we could pay the bills in January. We knew that 2013 was going to be a strong year for Customer.io. Our guts told us we were on to something. We didn’t give up at the end of 2012 and I’m over the moon with what the team has accomplished in 2013.

We’re looking forward to a great year in 2014. Thanks so much for your support and encouragement.

P.S. Thanks to Joel Gascoigne from Buffer among others for showing me the courage to be transparent, both inside and outside the company.