Telling your customers about a price increase is one of the toughest emails that you’ll send. What if all your customers get angry and leave? Hello anxiety! You might be hesitant to bring it up at all — just change the pricing page and hope nobody notices, right?

Of course, the reality is that customers will notice and get confused and angry. Failing to be up front about pricing, of all things, is no way to treat people.

Appcues — a Boston-based startup that helps software companies create personalized in-app onboarding flows — recently increased their pricing across the board to better align it with the value provided to customers. Instead of hemming and hawing, they emailed every person who’d ever signed up for Appcues to tell them about the change.

Appcues co-founder Jackson Noel describes the deliberate goals they had for their pricing emails approach:

It worked. Not one angry response or customers lost (and only 12 unsubscribes).

More than that — these pricing increase emails ended up capturing 263% more sales, leading to Appcues’s best month ever. Here’s how they did it.

The Email that Boosted Sales by 263% 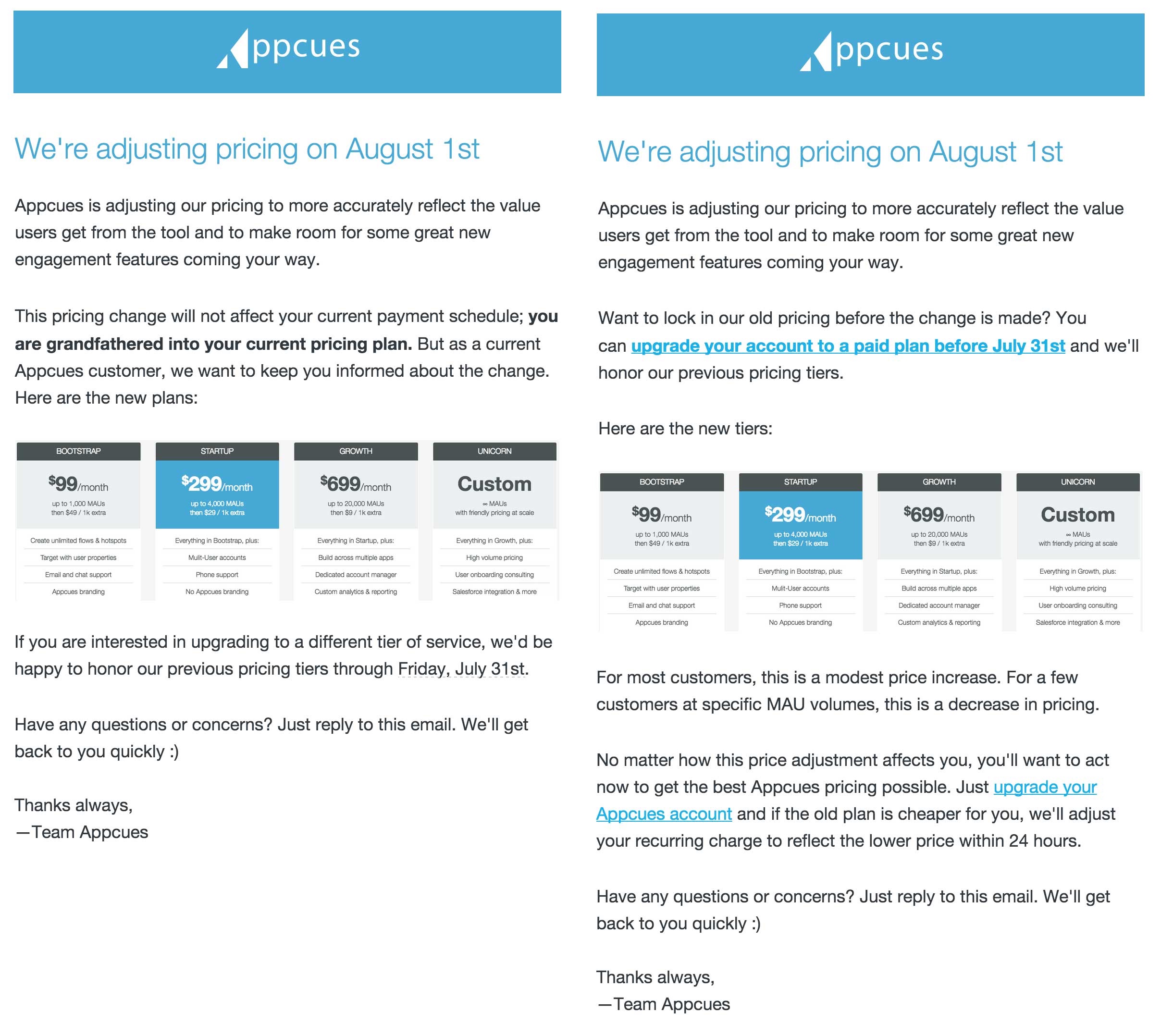 Appcues sent different emails to two different segments to notify them about the new pricing plan. The email on the left went to current customers, while the email on the right went to everyone who signed up for the app but wasn’t yet a customer.

1. Lead with your point

With something like a pricing change, you want to be clear from the start. In these emails:

The less straightforward you are about what customers may construe as bad news, the more credibility you lose. By being up front, you earn your customer’s respect and maintain the trust required to develop a long-term relationship.

One huge insight that the Appcues team had was to treat the news as a sales process. They realized that when you raise the price of your product, the lower, legacy pricing becomes a promotional opportunity. That becomes a win-win window — customers get a deal at lower prices and the company gains conversions to higher plans.

In their call-to-action to non-customers, Appcues created urgency to take advantage of its promotional pricing by invoking the psychology of loss aversion. If you don’t upgrade to a paid plan before July 31st, you lose the opportunity for legacy pricing forever. That grabs your attention and propels you towards a buying decision. If you’re considering buying Appcues at all, now is a great time.

It worked — this email had a 60% open rate with 4.3% click rate. Appcues was able to close a number of those sales and bring in 263% more in revenue in July versus June as a direct result.

As for existing customers, Appcues did something awesome by grandfathering them into their current pricing instead of forcing them to move up to the new pricing scheme. They focused on this message because they wanted to keep current customers happy and not damage relationships for the long-term.

However, in doing so, the company missed a chance to nudge this existing customers segment towards the opportunity to upgrade to a higher tier at legacy prices. They could’ve made a similar offer to the one for non-customers: take advantage of legacy pricing to upgrade now. Because they didn’t, there were 0 upgrades.

If the Appcues team were to do it all again, here’s what they said that call-to-action would’ve looked like: 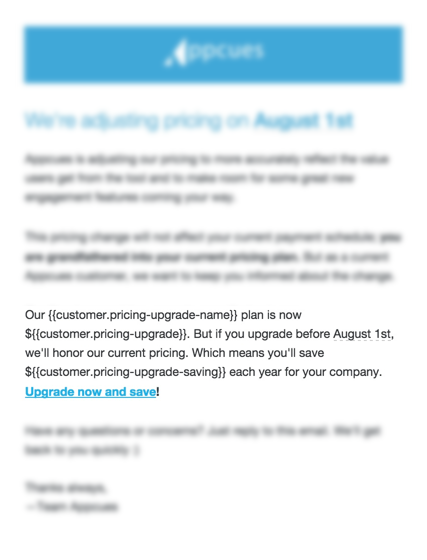 Never email from no-reply@company.com, especially for an email with this level of sensitivity.

Not only did Appcues send their email from a friendly account, they actively encouraged email replies. And they backed up their promise by responding to queries quickly to make sure that everyone was squared away.

The Importance of Following Up

The follow-up is crucial to closing deals, and that’s why Appcues decided to create short email campaigns for its non-customer segment.

Within a broad segment like non-customers, you’ll often find a heterogenous group. In fact, the non-customer group had 8x more people in it than the customer group, which made it ripe for some deeper segmentation. For example, people currently in their 15-day trial are much warmer leads than those who tried your product out 9 months ago and barely remember who you are. So Appcues created 2 separate email campaigns for its 2 non-customer segments.

Following up with the very hottest leads

For people currently active in their 15-day trial, Appcues created a specific follow-up to the initial announcement. One day before the new pricing took effect, they sent a second email to this specific segment reminding them of the pricing change and giving them one last opportunity to take advantage of legacy pricing.

This segment also had the most promising prospects for the pricing change. They were the most likely to convert to a paid plan compared to people who signed up several months ago. And since this was just a quick reminder to a targeted sub-segment, the email not only wasn’t annoying — it worked to move people onto their buying decision. 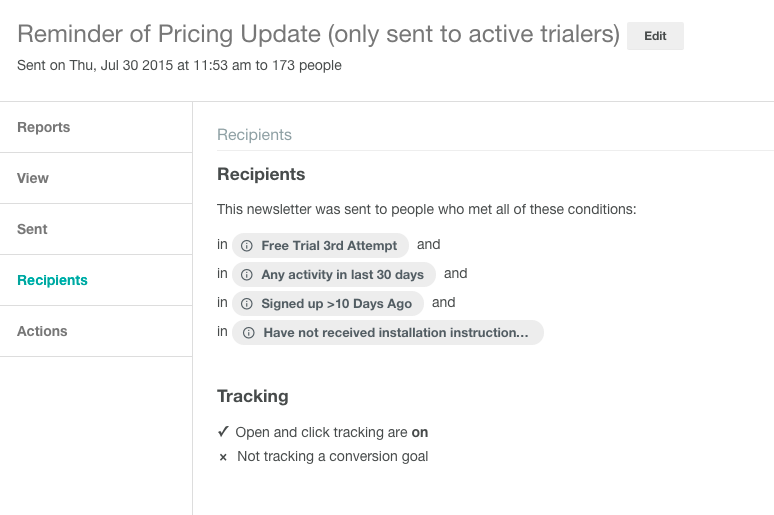 Often, people won’t respond or act on branded emails just by virtue of the fact that they come from the company, not an individual. Appcues decided to add the personal touch and email people directly, by hand.

John Sherer, Appcues’s Director of Business Development, reached out to sales prospects (people who’d shown interested in the product and weren’t yet customers) and divided them into two groups:

He wrote each active conversation email from scratch, drawing on the existing context of his sales conversation and without copy-pasting a template. They resembled this email:

These emails were incredibly effective in getting deals from interest to close because of the personal touch.

For prospects he hadn’t talked with in awhile, he copy-pasted and sent the following email to prospects that he thought had the potential to convert. He used HubSpot Sales to track opens on those emails.

This email reignited interest in a number of prospects. The Calendly link made it easy to book time for a call with John, where he would warm up the lead by demoing the product. After that, he would close the deal using the promotional legacy pricing.

What’s impressive about Appcues’s pricing campaign is that they were able to do what’s best for the customer and boost their bottom line, all with a pricing email that startups all too often are scared to send.

By thinking through their messaging strategy, they were able to send targeted emails that persuaded people to act positively in their own interest. The Appcues team accomplished its goals, simply by establishing some basic principles, creating 2 segments, and adding the human touch.

How have your pricing change communications gone? Share your story with us in the comments!

Explore why 1,400+ companies trust their messaging to Customer.io