Today we’re going to talk about the dirty stuff — spam reports. The data I’m going to share with you is aggregate stats across Customer.io senders.

After reading through this, you should know: Are you better than our average sender in spam reports? Are you worse?

If you’re better, send us some humblebrags! If you’re worse, let’s figure out how to improve your results.

How much of your email is marked as spam?

Here’s the average across a set of Customer.io senders: 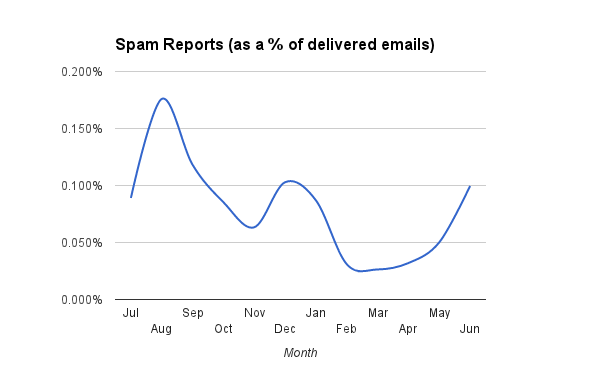 This is too high. You might notice a couple of recent peaks at around 0.1%. That’s from a single sender sending to a large (but disengaged) list. It skewed the stats.

Keep in mind that spam numbers are real people who got your email, looked at it and were confused about who you are, and why they got the email from you. Then rather than unsubscribing, they clicked the “Report as Spam” button.

Here’s what Mailchimp says about it:

Most ESPs and ISPs say a reasonable threshold for abuse complaints is 0.1 percent (one out of a thousand people reported your campaign as junk). Because of the sheer volume of emails sent from our IPs, and because most of our IPs are shared across multiple users, our threshold is stricter than that.

Mailchimp has a threshold at 0.01 percent for spam complaints. That’s a number you should shoot for. Here’s why:

What happens when someone clicks “Spam”?

A spammed email today may mean that your email doesn’t get through tomorrow.

When AOL thinks you’re a “bad” sender you’ll get blocked from sending or throttled. Your messages may also end up in a recipients’ spam boxes rather than delivering to the inbox.

How can you avoid getting marked as spam?

Doing the things we often talk about will help:

Get permission before sending

That means no buying lists! Get people to opt in by signing up for your product / service or for your list. Double opt-in is the gold standard, but for products a single opt-in usually works best.

Set expectations for what people will receive from you

There should be no bad surprises. Be clear about what people will get from you: Send regularly and on a schedule

If someone signs up, but never gets any emails from you, they will forget about you after a month. If you send a marketing newsletter send it at least 3 – 4 times per month to keep people engaged.

Make it easy to opt out of your emails.

A link at the bottom usually works, but consider putting it in the first paragraph in riskier mailings.

Know your audience. Write your words to inspire, teach and help them.

Last week you might have received an update email about the product. Blasting everyone who put in their email address who probably get some spam complaints, so I segmented to identify people who would likely be interested in the update.

Unless you’re paying, or sent us data, or basically did something in the last month, you’re not getting the email.

Both Fab.com and LinkedIn have recently started opting people out who don’t engage with their emails. Here’s an example from LinkedIn:

Getting marked as spam sucks. My hypothesis is that most of the time spam complaints happens from Hail Mary marketing — marketing where the recipient has a weak relationship or has disengaged from the company.

Take some time to review who you’re emailing, how they got on your list, and whether or not the emails your sending are being well received.