We made it through the first year folks! April 1st, 2012 John and I started full-time on Customer.io. In January 2012 we set a goal:

And when we hit that number, so began our journey on the Long Slow SaaS Ramp of Death. If you haven’t seen the video, Gail Goodman, CEO of Constant Contact gave a wonderful talk at the Business of Software Conference. 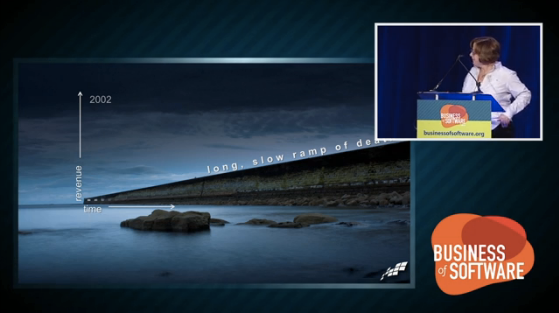 One thing in particular stuck out as a big difference between starting an internet business in 1999 vs. 2012:

Whoa. We’d have been dead in the water. Today, you can use Stripe and get it set up in an hour for no cost.

Our business is a testament to doing more with less but we still underestimated the time it takes to build a SaaS business and get to Minimum Critical Mass — which as Gail Goodman defined is “enough scale to pay people”. If you’re our customer this might leave you wondering:

How likely is Customer.io to go out of business?

Unlikely. We’ve been building the company and product to be around for a long time. We’re not going out of business any time soon. Today, if we never made another dime, and raised no more money, we could continue until mid 2014 thanks to some fantastic investors. We’ve also been increasing recurring revenue month over month as you can see in the chart below.

Let me explain a little. The big jump in March was unusual. Our revenue just about doubled. I don’t expect that to continue. Things will probably level off back to 10 – 30% revenue growth month over month.

We’ve taken a long-term view with the company and are focusing on creating a self-sustaining business before growing the team and our costs. Practically this means we all wear many hats. You’ll find John, Asha and me helping with customer support for example. This is really hard to do, and I can understand the temptation to raise additional money and staff up.

Our rules for starting a SaaS business

We’re not yet a successful company, but in our first year, we stayed alive. I want to share a few of our philosophies that make me so proud of our team and what we’ve done in year one.

If you ever want to charge real money, charge from day 1. You can rationalize that you want more people using it to get feedback, but if it’s not worth paying for on day 1, you should know that and adjust accordingly.

2. Do things that don’t scale (then scale them)

Had we tried to start by building the system we have today, we probably would have failed. We wouldn’t have understood the things people wanted to do and how they wanted to use the system. John earned the nickname “The Wizard” (like Wizard of Oz) during this time because he was essentially pulling levers behind the scenes to make sure the software did what people wanted it to.

If you have an idea, build it and get it out there. When we released newsletters and transactional emails publicly, a lot of our customers were already using those features. More recently when we released a new dashboard, we did the bare minimum and then put up a feedback form to better understand what people want to see.

When you release, keep your chunks as small as possible. For us it’s at most a week’s worth of work for 1 person. It’s less painful to make a lot of small adjustments along a clear path.

Year 2: Continue on the long slow SaaS ramp of death

There’s light at the end of our tunnel. We’ll hit profitability within the year on our current trajectory. Starting a business isn’t easy and a SaaS business probably means months (years?) of operating at a deficit. Like any business there are amazing days and hard days. But if you love what you do, then it’s always easy to get out of bed in the morning. There’s nothing we’d rather be doing than building Customer.io.

If you’re our customer, we’ll continue to earn your business every day by making Customer.io serve you better.

If you’re not our customer yet, I hope we meet you soon.