Isn’t it absurd that we have to keep reminding each other to write emails like a human?

Still, we face a cultural bad habit of dashing off bad, robotic, and boring emails, especially when it comes to sending them for a business or organization. Something about that context tends to drain out life and character.

Not so with comedian Louis C.K., one of the most human voices out there. It turns out Louis is also a great email marketer. 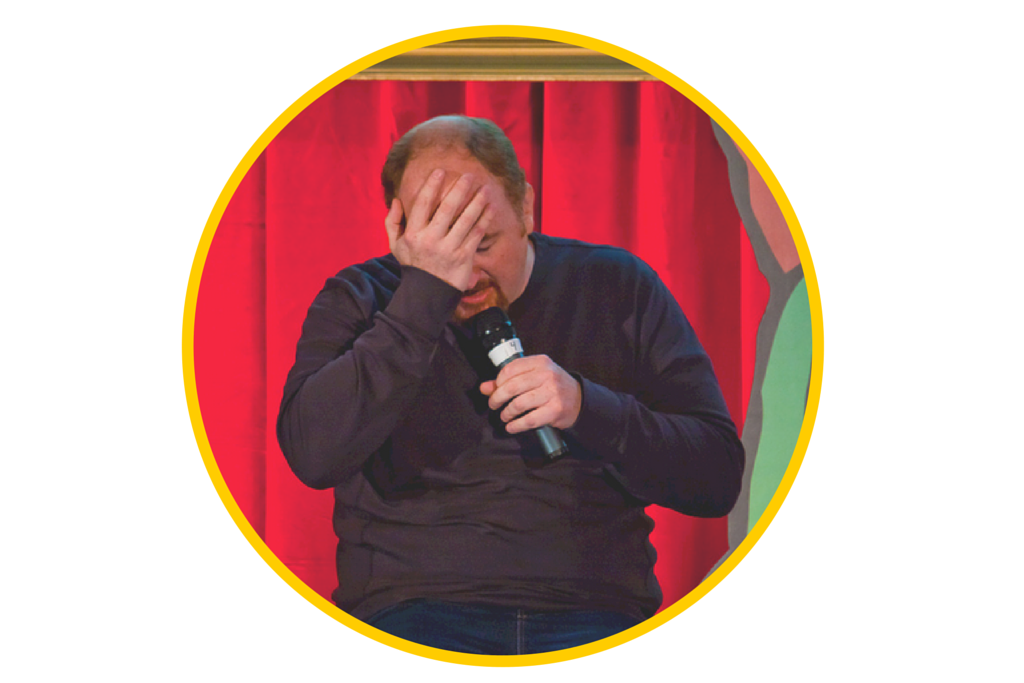 While you might not be touring the standup circuit or making TV shows, you probably have something in common with him — you sell stuff on the internet.

Back in 2011, Louis made a splash when he broke away from tradition and sold one of his comedy specials directly online to his fans. That experiment was incredibly successful — and he’s continued to sell show downloads and tickets while cutting out middlemen like Ticketmaster and studios like HBO. As part of that, he also gets your email address.

The best emails feel personal, as if the writer is a friend, speaking directly to you. It’s no wonder, then, that Louis’s regular-guy stage persona translates so well to email — and at the end of the day, gains him fans and sales.

Let’s take a look at what makes Louis CK’s emails so successful:

Louis takes the time to tell the narrative of what’s going on behind the curtain.

His emails remind me of how my friends and I wrote emails in the early 2000s. In an age without smartphones or social media, we wrote long, rambling, epistolary things to catch each other up and share our thoughts, and perhaps, reflect ourselves.

Recently, he mused about his experiences coming up in the comedy club circuit, as part of a long ode to explain why he shot his latest special in a nightclub rather than a theater:

But Nightclubs, comedy clubs, is where comedy is born and where comedy, standup comedy, truly lives. Going back to Abraham Lincoln, who was probably America’s first comedian, Americans have enjoyed gathering at night in small packed (and once smokey) rooms, drinking themselves a bit numb and listening to each other say wicked, crazy, silly, wrongful, delightful, upside-down, careless, offensive, disgusting, whimsical things.

He’ll describe the challenge of finding venues when he did a tour without using traditional ticket services, or what it was like wandering around New York City in the aftermath of Hurricane Sandy right before hosting “Saturday Night Live”, or show you a screenshot of his PayPal account after his first direct download experiment reached a balance of over a million dollars:

One million dollars. That’s a lot of money. Really too much money. I’ve never had a million dollars all of a sudden. and since we’re all sharing this experience and since it’s really your money, I wanted to let you know what I’m doing with it. People are paying attention to what’s going on with this thing.

Takes the time and space that your story needs. For Louis, that means writing an email reminiscing about comedy clubs that clocks in at over 1,800 words. (His subject line for that one, appropriately, is “Very long email from Louis CK”.)

Always have a purpose.

Telling stories and expressing your voice doesn’t mean you lose sight of your point. As much as Louis seems to write off the cuff and share personal thoughts, every one of his emails has a purpose — whether it’s to notify his fans about an HBO special or to publicize his first feature film.

In fact, when The Atlantic’s Adrienne LaFrance ran Louis’s emails through a document analysis tool, she found that “his messages are overwhelmingly characterized by promotional language.”

Words that kept reappearing included: special, tonight, tomorrow, tickets, ticket, buy, and price. Here’s a word cloud I made with his emails: 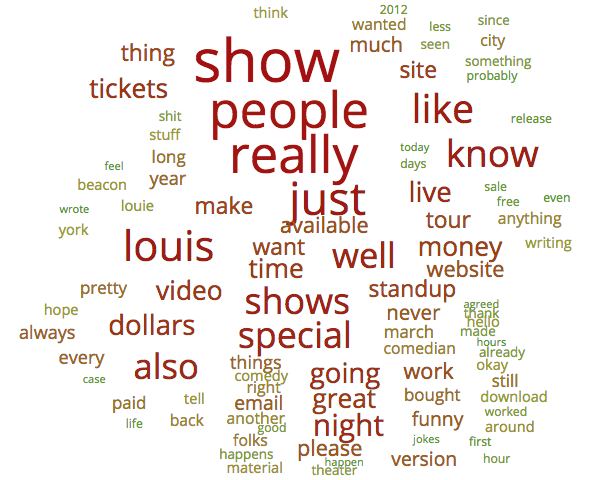 Marketing and business-y language is almost always immediately off-putting, which is why the simple act of being treated and spoken to like a real person can be so remarkable. Personality, voice, tone, and a dose of self-awareness are what mediate that repellant sales-y pitch.

Louis shines at taking some of the traditional components of email and going off-script. Take his email greetings, which plays with the stock salutations of mass emails:

Or how he wraps up an email with a personal detail:

Okay. That’s it. I have to do some laundry now.
Take care of yourself and don’t be a jerk to people.

If you look at this next email from far away, it looks like any regular email message, with a greeting, body, closing, signature, and postscript.

My first feature film, Tomorrow Night, is available now on louisck.com for 5 dollars. You can go there now and get it. You don’t have to. But you can. And you may.

if you are not a person and instead you are a dog or you are 2 whales and a wooden box, then please disregard this message. Because I don’t want dogs or whales and boxes to watch my movie. This ps is now longer than the original message.

The conventions and customs of email writing are also clichés, where you might have the most room to riff. When you look at your marketing emails, can you identify a personality or voice to them or are you filling in the blanks of stock marketing scripts and email templates?

Be relevant by setting up segments and expectations.

Getting emails about shows that aren’t in my location — like a notification that a Phoenix show got postponed — would make Louis’s emails less delightful. Segmenting your customers means you make sure your emails are always relevant and ultimately more engaging.

You can also be more relevant by setting expectations in your copy. For example, about 5 minutes before sending the “Very long email from Louis CK,” he sent out a brief email announcing his new special, with all the relevant purchase details, and then gives this notice:

That’s the basic news of this email so go ahead and go watch the show. You’re getting another email from me now which is crazily long. So I sent it separate. If you don’t enjoy long winded, unedited coffee-addled… while my kids yelled at me to take them sledding-written material, then skip the next email. thanks.

Louis’s emails look entirely manual and DIY, with little to no formatting — not even bold or italics. It’s just text with the occasional link. 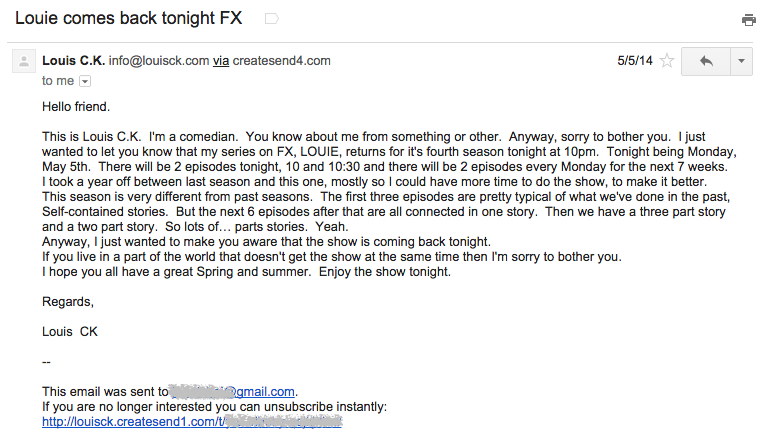 Emails don’t land in your inbox as being from “Louis CK Marketing Team” but “Louis CK.” Even his closing signature isn’t automatic, signing off with variations like: “Louis CK”, “Louis ck”, “Louis C.K.”

It’s like he sat down at his computer, opened up a new window in a regular email client like Gmail or Yahoo, typed up a message, and hit send — even though he’s using an email service provider that manages marketing and bulk emails (and complies with CAN-SPAM by providing that all-important unsubscribe link).

Simple layouts often perform better, especially in contexts where you’d like readers to respond or click through to take an action. This casual look plays a vital part in building trust and an agreeable frame of reference — helping your marketing emails look like what your friends send.

If Louis puts the very same text into a fancier HTML template, it would be like he was communicating a different message.

Of course, you — and your business — aren’t Louis CK, so your text won’t sound like his. The trick is to take the time to find and express your personality and what you’re about. Here’s how some organizations use some similar tactics to engage and convert their email readers:

Popforms has a great newsletter that always feel warm and personal, thanks to the efforts of co-founders Kate Matsudaira and Kate Stull. 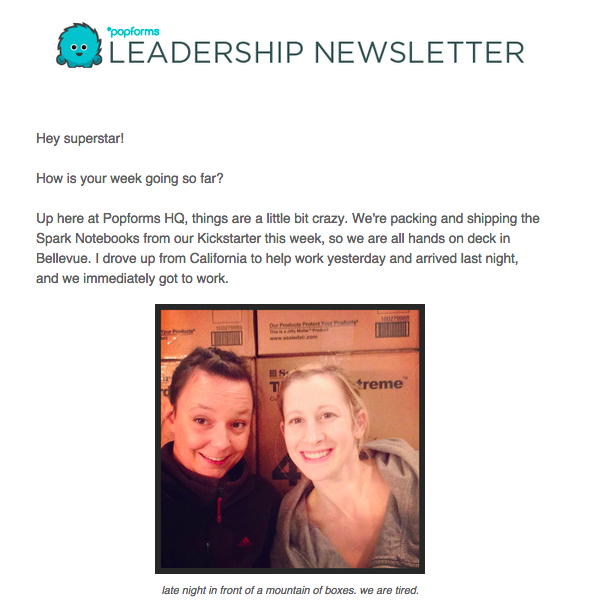 They share firsthand stories of how they’re building their company, from how they grew their email list or what their progress is on their Kickstarter project — letting you in on their process and increasing how invested you feel in what they’re doing.

At the end of 2014, everyone at Customer.io received gift cards for Watsi, a direct funding platform to pay for medical treatments and healthcare for those in need around the world. 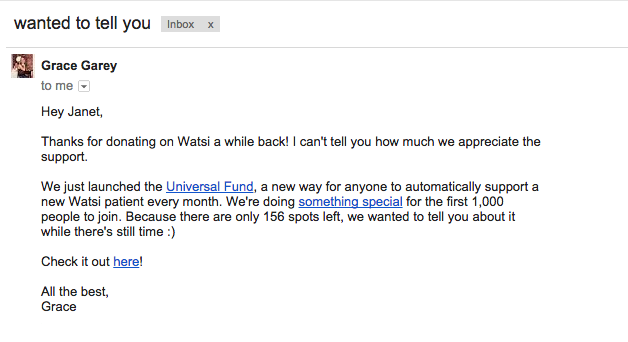 The Watsi team send out their thank you email as well as this follow-up in plain text — which felt in line with the nature of the donation and spirit of the organization. Here, this format and personal feel convinced me to click through.

Email preheaders, closings, and postscripts are great places to inject some personal detail.

I’m not even sure who is behind the This American Life newsletter, but I always love the short personal postscript at the bottom.

The most recent postscript — “This update edited with one week left before moving out of NYC. Quick! What shouldn’t I miss as a resident?” — made me want to reply.

In email marketing, we always talk about sending emails that people actually want to read — and that’s very rarely as simple as it sounds.

In his “Very long email,” Louis describes his comedy process, which is long, thorough, and iterative. He’ll do 20 minutes of new material that would make young, welcoming crowds cheer and take that set to an increasingly tougher crowd and venue until he was left with one joke, the keeper.

As effortless and casual as Louis CK (and your favorite emailers make it seem) — great writing that feels personal and resonant, whether for an email or a blog post, a novel or a standup act, takes time, practice, and care.

Who do you think sends awesome, interesting, personality-filled emails? Share with us in the comments!