Franklin Delano Roosevelt had a Presidency filled with adversity. He became President during the height of the Great Depression. In his second term, the US entered World War 2.

On Sunday I went to Hyde Park, New York to see FDR’s childhood home and the Presidential Library that sits next to it.

Before this weekend I knew very little about FDR. However, I left with a strong admiration for him.

What does FDR have to do with content marketing and email?

Walking around the exhibit in the Presidential Library, I read this blurb and excitedly took a picture of it for you. Take a look at how people describe FDR’s fireside chats: 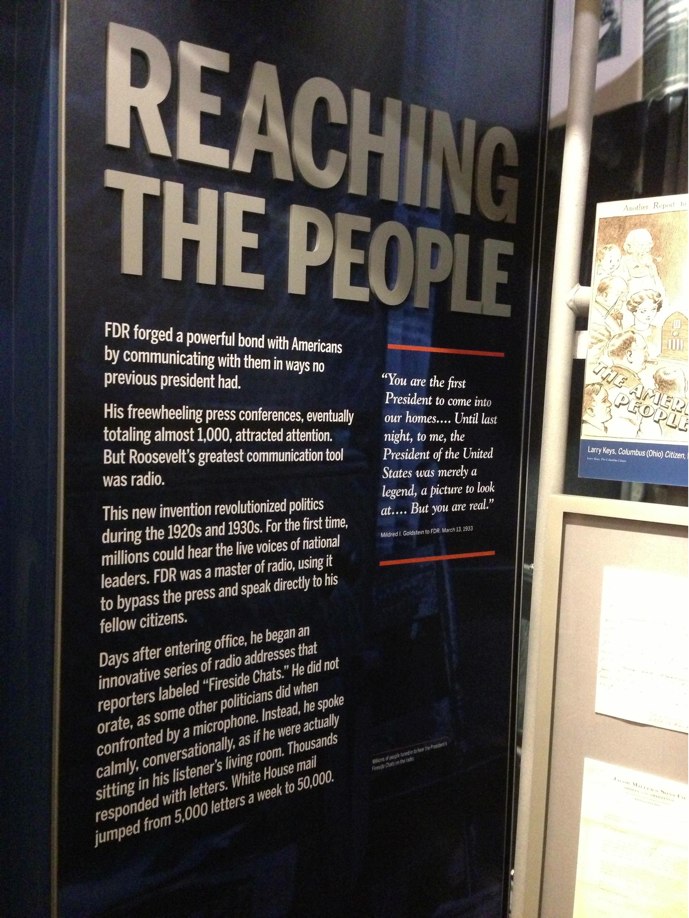 FDR was speaking to people over radio in a relatable way. He was connecting with people at scale the way you do when you write conversationally in email.

This level of intimacy with politics made people feel as if they too were part of the administrations decision-making process and many soon felt that they knew Roosevelt personally and most importantly, they grew to trust him.
Wikipedia

So, back in the 1930s, FDR got it. He knew how to connect with people. What’s amazing is how many companies and people have forgotten how to do this since the 1930s. Most still go with a formal, un-relatable tone.

The difference between connecting and not connecting with people is meaningful for a business or a President.

After the fireside chats started, White House inbound mail went from 5,000 letters to 50,000 a week. FDR was reaching people in a unique and personal way over radio.

I’d encourage you to imagine yourself sitting in your (probably rural) living room, turning on the radio and listening to the President speak to you:

He is speaking directly to you in language that is direct, to the point, and personal.

Here’s an excerpt from a response FDR received after the broadcast above:

I want to thank you for your visit at 10 o’clock Sunday night. I can see you seated in the big armchair in my living room, pipe in mouth and talking on the crisis that confronts us all, telling me in words that I could understand what you had done and the reasons for your action.
Letter from Simon Miller

I hope you are too.

P.S. Who do you think does a good job of connecting with people at scale? Share that in the comments.