2014 is in the bag and it was a great year for Customer.io. We’re grateful to all of you — our customers, investors, friends — for your support and encouragement. We’re 2 1/2 years into our 10 year plan to change how businesses communicate with people at scale. There’s much work to do.

Here’s what our stats for the year look like:

So what did we do all year?

We hired great people to do great things for you

January 1st, 2014 was our first day as a distributed team. Over the rest of the year, we hired the best people we could — regardless of location. 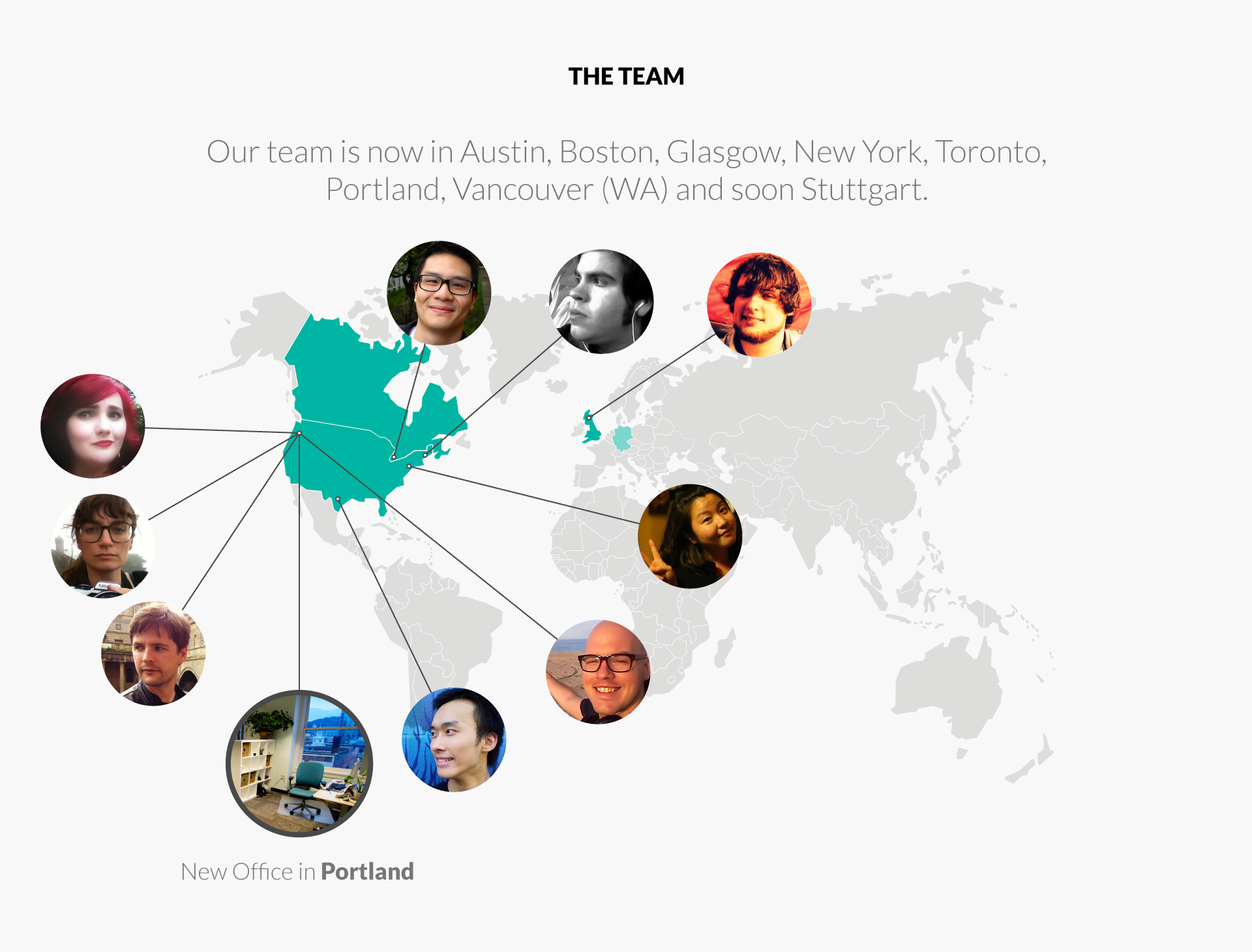 Hiring a distributed team is awesome but hard. We had some false starts in hiring this year, but we’re getting better.

Our belief in distributed companies is strong. We’ve got a year under our belt learning how to do it, and we wrote about some important lessons from becoming a distributed team earlier in the year.

In the beginning of 2014, we hit break-even for 5 people. For the rest of 2014, we operated at cash flow neutral. With each additional dollar, we hired people and grew the team to 9. We ended 2014 with our first $1 million in revenue year and $1.5 million in ARR (annual recurring revenue run rate).

We’re fortunate that the team’s hard work in 2014 puts us in a very strong position. We don’t need to raise money to continue to grow the business.

However, our ambitions for how we can help you are grander than what exists today. We’ll raise additional funding this year in order to build the future faster.

We opened an office so you know where to find us

What a difference meeting people in your own office makes! For over 2 years we operated out of rented or borrowed space in NYC at General Assembly, Pivotal Labs, and WeWork.

Even though we’re distributed, I wanted a home base for team retreats and gatherings, somewhere we’d be happy building the company over 10 years.

Portland, Oregon is affordable for both housing and office space. Personally, I wouldn’t have to sell the company to buy a house! Plus, it has a mild climate, lots of great nature nearby, and a tech community.

Our company finally has a home we’re proud of.

We’ll be keeping at least engineering, customer success, and marketing distributed, but plan to grow some functions locally.

My big concern is that remote employees feel alienated or out of the loop not being at our HQ. As we grow the team, I’ll be working hard to make sure that doesn’t happen.

… and we learned a valuable lesson:

We used the Ember.js framework back in 2012 for Customer.io V2. We got stuck on an old version of Ember.js and decided it would be better to start from scratch and probably only take a few months.

It took over a year before we made the new version the default.

That it took so long was a failure of my leadership. It was terrifying and stressful when the project was just not done.

But, the new version is out, and it’s a fantastic place to build the future from. In 2014, we moved some of our data to the awesome Foundation DB, developed a new database to help us store your terabytes of historical data, and built a front-end framework that we’re now merging in to production.

The engineering team is producing phenomenal work, and we’ve got some big plans for 2015.

We made plans to kick some butt for you in 2015

In our team year-end review, we discussed our areas of focus for 2015:

We’ve spent more energy making the product and API great for developers. Technical marketers understand it too, but many less technical marketers struggle. This year, it’s all about making the experience easier and better for marketers. We want every marketer to have superpowers with Customer.io.

We’re increasing access to debug information in the interface, as well as making data more easily available so you can check everything yourself.

3. Improve the experience for larger customers

We’ve been able to help a lot of companies with large user bases, including B2C companies and low-touch, high-volume B2B companies. We’ve noticed that the buying process is different with those businesses. We’re hiring Account Execs now to help people figure out if Customer.io is right for them.

We got away with not building multiple logins for each account for a long time. That’s one feature among many that we’ll be releasing this year to better serve larger teams.

In 2015, we’re going to continue to build the best company and product for businesses that have (or plan to have) more than 100,000 users. We’re planning to end 2015 with a team 4x larger than we are today. We’re excited to have you on that journey with us.